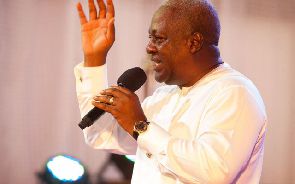 Ghana has earned a lot of respect within the international community than even Ghanaians credit their own credit with, President John Mahama has said, adding that Ghana stood the chance of being a great nation if only its citizens had a little more trust and belief in their own country.

"I'm happy that when we went to the [UN] General Assembly, I recognised the respect with which Ghana is held. We met several heads of state and I think that if we trust and believe in our country the way outsiders believe in our country, this country will be the best nation in the whole wide world," Mr Mahama said at the Royal House Chapel International in Accra on Sunday, 2 October.

Mr Mahama also said God has His hands on Ghana and so no evil shall befall the country in connection with the December 7 polls.

"… We have elections again, we have no cause to doubt that those elections will be peaceful because we've done it six times over and every time we are going to do it, there's scaremongering – 'this will happen, that will happen' – but don't we trust in God?"

He said: “God’s hand and favour [are] on this country,” adding: “There is not going to be any trouble.

"We have a constitution, we have operated it, if we have an election dispute, we know how it must be handled. Definitely, violence is not an option."

Mr Mahama, who is seeking a second term in office, said as part of efforts to ensure the December 7 polls are peaceful, "… Whatever we can do as human beings – and I as the commander-in-chief of the Armed Forces of Ghana – will do to make sure we have a peaceful and successful election. The seventh elections we are going to hold will again be peaceful and successful and whoever God decides must lead us in the next four years, He Himself will decide"