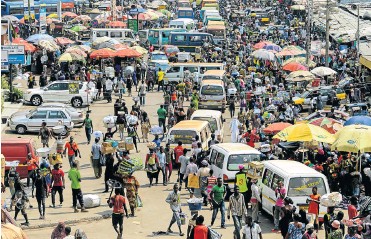 An extract from the book ‘Africa First!’ by Jakkie Cilliers

By 2040 almost 80% of Ghanaians will live in urban areas — a trend that allows rapid economic growth.
● In repeated visits to Ghana over the past two decades, I have witnessed the amazing political and developmental revolution that is taking place there, and in many other African states, and been able to consider its potential for job creation and progress.

By African standards, Ghana is small, with a population of around 29-million people. It is more urbanised than most African countries (at around 60%), allowing for a more rapid transition to digital services and making it easier to provide water, sanitation and other services.

By 2040 almost 80% of its citizens will live in urban areas — a huge advantage that will allow rapid economic growth. This could eventually allow Ghana to graduate from its current lower-middle-income to upper-middle-income status.

Partly because of higher-than-average rates of urbanisation, total fertility rates (currently at four children per woman) are declining rapidly and Ghana will enter its demographic sweet spot earlier than most other West African countries, around 2033. Thereafter, the positive ratios of working-age persons to dependants should ensure even more rapid growth rates — provided that Ghana manages to sustain its progress over the past decade towards inclusive, democratic governance.

On a trip to the country in December 2018 I was invited to speak at a conference hosted by the International Monetary Fund (IMF) on the future of work in Sub-Saharan Africa. The gleaming, brand-new Terminal 3 at Accra’s Kotoka International Airport is a far cry from the sorry colonial-era building that served as an international airport for so many years.

Officials are smart, courteous and clearly proud of the new facility. Kotoka was built by a Turkish construction company, Mapa Construction, at a cost of $400m [R6.9bn], and is unpretentious, solid and well maintained (in contrast to many of the Chinese constructions elsewhere).

At the opening session of the IMF conference, held at a swanky Accra hotel, Ghana’s vice-president, Mahamudu Bawumia, set out the country’s plans to leapfrog its development by using information and digital systems. In 2012, Ghana introduced biometric voter registration, and since May 2018 a smart national ID system (dubbed Ghana Card) that uses biometrics has been rolled out (free of charge to all Ghanaians).

At some point the Ghana Card will be a requirement to open a bank account, apply for a passport or driver’s licence, register a SIM card, buy property, register a business, or even enrol children in school.

Globally, nearly a billion people lack any type of legally recognised form of identification, without which it is impossible to access banking, government benefits, education and many other critical services. Most importantly, a digitised national population registration system linked to the steady increase of electronic forms of payment will allow the state to monitor large portions of the informal sector and incorporate them into the formal economy.

This is a huge leap forward in a country that has, until recently, had no comprehensive identity system.

It is also occurring at a pace that would astound bureaucrats in China and Western countries where such systems were originally rolled out manually and with great effort over several decades.

In addition to the national ID system, the GhanaPostGPS will provide a unique digital address for each 5m² of land area in a country that previously had no formal system of finding a specific location without local knowledge. Armed with a digital address, small and informal businesses will be able to register for a bank account and access credit. It basically means that anyone with a phone technically has a bank account.

The GhanaPostGPS app comes with other functions as well, such as panic buttons for emergency communication with the police, fire and ambulance services. A unique digital address will allow door-todoor delivery of literally everything. For example, the country will soon start with the delivery of emergency medical and other supplies by drone. Here, Ghana is copying the example of Rwanda, where this has been done for some time. (They used corporate social responsibility funds for the initiative.) Besides many other benefits, these innovations will improve tax collection, since both informal and formal businesses will steadily be forced to use electronic payment systems that are all part of the formal economy, thereby increasing government revenues. This will, again, enable the state to deliver other services.

Soon, Ghana will also have a fully digital platform for the payment for all government services, including smart driver’s licences and digital car registration. Moreover, the country is busy with the digitisation of land ownership. By the time this book is published, it should have a new base map survey (the first since 1974) that uses blockchain technology to secure and verify the ownership of all land. Furthermore, with the support of the World Bank, the Ghanaian ministry of education is adopting modern technology by delivering its lessons through the use of e-learning technology.

Modern technology also allows for better policing of things like mining licences, for example. In many African countries, including in SA and the Democratic Republic of

Congo, illegal mining is rife, and is often done by foreigners who mine at night in extremely dangerous conditions. Already 150 drone pilots have been trained to monitor illegal mining across Ghana.

This is an example of what is possible in a future Africa where the demand for new services is met and job opportunities for young people in urban areas are unlocked.