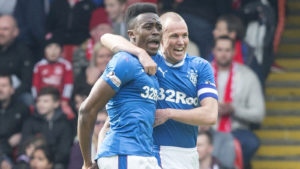 Ghanaian striker Joe Dodoo scored and provided an assist  for Bolton wanderers in their 3-4 defeat to Burton Albion on Wednesday at the University of Bolton Stadium.

Bolton began their new year with a defeat at home in the England league 1 encounter against Burton Albion, who are three points off the play-off places.

Dodoo, 24, hit an early thunderbolt for the hosts and laid on a second for Daryl Murphy, before a goal from David Templeton and two from Lucas Akins put the visitors 3-2 up at half time.

Luke Murphy’s red card at the start of the second half left the hosts unable to mount a fightback, Liam Boyce adding a fourth before Dennis Politic’s 84th-minute consolation.

Dodoo signed for Bolton on a deal until the end of the season after the expiry of his contract at Rangers.

The 24-year-old started his career as a trainee with Leicester City before moving to Rangers in July of 2016.

He went on to have short loan spells with Charlton and most recently spent last season on loan at Blackpool.