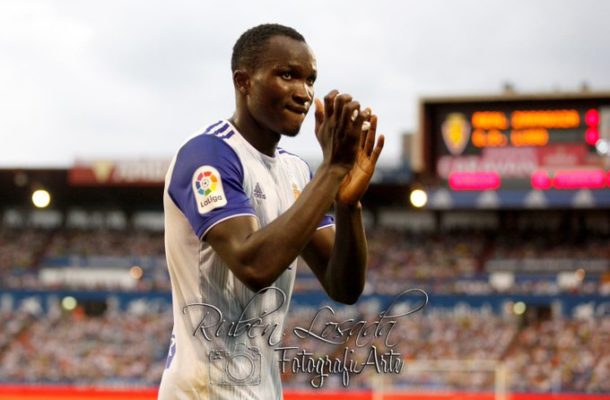 Ghana's Raphael Dwamena has been ruled out of football indefinitely after being diagnosed with a heart condition.

Spanish second tier side Real Zaragoza has announced that  striker Raphael Dwamena has suffered a 'health problem' which prevents him from engaging in sports at the moment.

The 25-year old who started his Zaragoza career in blistering form is expected to miss a lot of games while dealing with the problem which reportedly requires time to heal completely.

His club Real Zaragoza, in a statement, revealed Dwamena would undergo more tests and continued: “Real Zaragoza trust there will be a quick and total recovery.”

It is the second major health scare that Dwamena, 24, has suffered during his professional career.

It will be recalled that in August 2017, his then club FC Zürich had agreed a £10 million fee with English Premier League club Brighton & Hove Albion for the transfer of Dwamena.

He was set to join Brighton subject to passing a medical, obtaining a work permit and international clearance, however, the deal fell through after Dwamena reportedly failed his medical due to a heart condition. He instead, remained an FC Zürich player.

At the time, FC Zürich maintained that the deviation detected "has been judged as being neither harmful to health nor compromising the performance of a top athlete".

He later joined La Liga side Levante UD in August 2018 before he was loaned out to Zaragoza for one year in July this year.