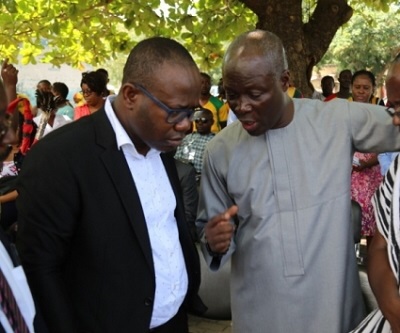 Ghana’s Sports Minister Nii Lantey Vanderpuije has vowed to block future friendly matches of the Black Stars if the game is unable to fetch the West African nation in excess of $500,000.

In his latest salvo targeted at the Ghana FA, the tough-talking minister is planning to send a directive to the federation regarding friendly games involving the Black Stars.

The Black Stars are scheduled to play a friendly against South Africa on October 11- but already that high-profile match is a matter of intense controversy in Ghana.

The sports minister has revealed his outfit will not sanction the game until he's satisfied with the monetary consideration.

“The Ministry will be sending this directive; that only teams able to pay at least $500,000 will be made to play against the Black Stars,” he told Kumasi-based Nhyira FM.

“The Black Stars brand is not cheap for teams to pay below this amount. So if the Black Stars is this attractive then teams should be prepared to pay well for us.

“Ghana has top class players like Dede Ayew and Asamoah Gyan and the likes so we should know our worth.

“We need to be making money from friendly matches to cater for the huge expenses of the Black Stars in subsequent qualifying games and this is why this measure is very important.”

The GFA has been involved in a prolonged dispute with the ministry over issues concerning the management of national teams since Nii Lantey Vanderpuije began his reign as head of the latter in February.

Essentially, the ministry has consistently voiced out frustrations at being left in the dark about several key decisions on the teams, while the FA insists the ministry's public outbursts have left much to be desired.

His latest comment will draw a response from the Ghanaian federation.

The Black Stars impending 2018 World Cup qualifier against Uganda in Tamale on Friday has been overshadowed by a public banter between the minister and the federation.