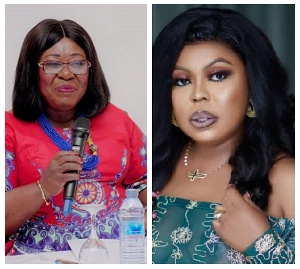 Media personality Afia Schwarzenegger has formally apologized to Chief of Staff (CoS), Akosua Frema Osei-Opare, relative to reports of a monetary donation that generated controversy over the week.

Afia Schwar, who was the guest host of the United Showbiz programme on Accra-based UTV, took the opportunity to explain into detail how the entire episode started.

“Let me take this opportunity to apologize to Mama Frema Opare,” she stated when the issue was raised for discussion as a major part of the March 19, 2022 edition of the programme.

According to her version of events, detractors took her initial claim of having received GH¢50,000 donation from the Chief of Staff out of context and chose to twist something she had publicly intended to be in jest into a big deal.

She spoke extensively about having formally invited the CoS to her father’s funeral and her decision subsequently to thank all well wishers who attended and even those who were absent citing Ashanti customs.

“I said I was going to thank all those who failed to attend the funeral. As is the case in Ashanti custom, whenever you go and inform someone about a funeral, you need to thank them whether they attended or not.

So in my custom, I thank people who I informed and I made it clear to all those present at the gathering (about 30 people) that I was going to be sarcastic and silly about that very gratitude session,” she stated.

She also expressed misgivings about how the CoS personal assistant, one Protozoa, who was privy to the first video in which she made the claims even before she posted it has treated the entire episode.

Entertainment personality, Afia Schwarzenegger alleged recently that she had received monetary and material support from the CoS for her father's funeral.

According to her, the Chief of Staff gave her family GH¢50,000 not only for the funeral but also catered for transportation of her late father’s remains to Ghana.

Last month, the CoS was in the news relative to money doling when Assin Central Member of Parliament, Kennedy Agyapong alleged in an interview that Madam Frema Osei-Opare gave him an amount of 120,000 to pay into the account of absentee MP, Sarah Adwoa Safo.

Although Kennedy Agyapong did not mention the currency, many reports suggest the amount was in the local currency.

He also alleged that the Chief of Staff facilitated chartering of a private jet flight for the MP to return for the E-Levy vote last December.

Her office has not commented on either allegation even though a group in the NPP have warned that such reports do not bode well for morale within the party.