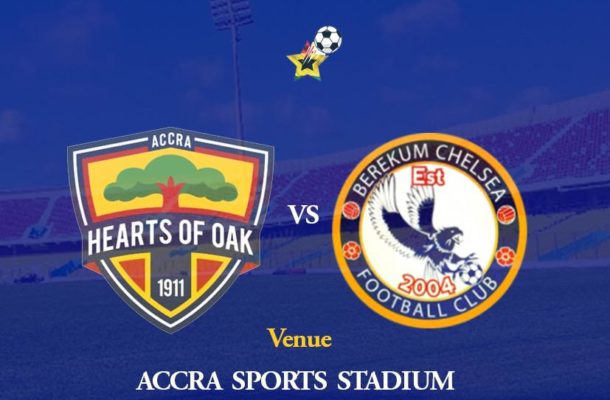 The Phobians will begin their journey to end a ten-year Ghana Premier League drought as they go toe to toe with Berekum Chelsea in one of the standout games in the opening matchday of the 2019/2020 season.

The game will take centre stage in the capital City of Ghana at the Accra Sports Stadium, 3:00pm local time on Sunday December 29.

The last time the two sides met, the Rainbow lads tasted a 3-0 defeat against the Bibires of Berekum at the Golden City Park.

But the circumstances surrounding this season's opener will be different with a lot more at stake.

Hearts have gone 10-years without the GhPL title, losing a precursor game to their bitterest rivals Kotoko, and will be looking to make a positive start to the League journey to reclaim their birthright.

Berekum Chelsea on the other side have not won any major trophy after wining the Ghana Premier league in 2011 and 2012 President Cup, the team is well prepared for another glory with high hopes to begin the new season on a good note at the Nation's Wembley.

Both clubs have reinforced with notable names in the indigenous league with Bernard Authur, Richard Authur and Frerdrick Ansah Botchway all at the Phobians camp while the Berekum side have captured the signature of Kotoko goalkeeper Ibrahim Danlad on a season long loan, Cephas Doku from Liberty, Nasiru Osman and Ex-Kotoko stalwart defender Ahmed Adams has return home.

Hearts lost their last preparation game in the President Cup 2-1 in Kumasi against their arch rivals Asante Kotoko.

On the other side, The Bibires lost 1-0 in a regional derby against Bofoakwa Tano in their last pre-season friendly.

The Ghana Premier League will kick-start on the 27-29 of December 2019 across all approved venues by the Club Licensing board.

Star players to watch, Joseph Esso of Hearts of Oak and Fuseni Zakaria of B.Chelsea.

#BringBackTheLove, Igniting passion and creating wealth for all consumers of the product.