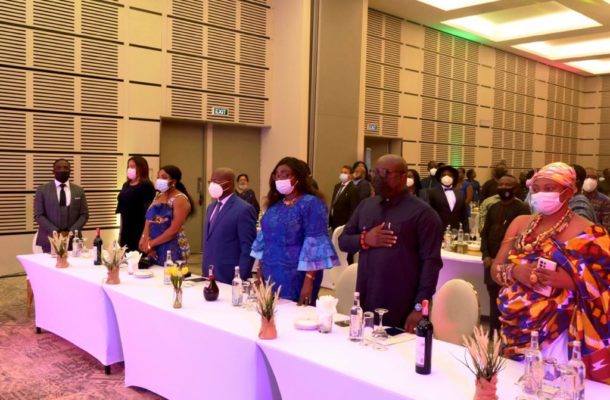 The executive body of Ghana India trade advisory chamber has awarded efforts of the immediate past Ghana’s High Commissioner to India for his enormous support for the chamber and its operations at the 2021 edition of the GITAC and GATAC Business Explosion held at the LA beach Hotel in Accra.

This event hosted dignitaries from both the public and private sector at the Labadi Beach Hotel in Accra. Both the 1st and 2nd Editions of this initiative has had most of its backing from His Excellency Amb. (Dr.) Mike Oquaye Jnr. who has contributed tirelessly to the progress of this organisation and its actives.

The dignitaries of this event included Hon. Osei Kyei Mensah-Bonsu, Minister of Parliamentary Affairs and Majority Leader, Hon. Alan Kwadwo Kyeremateng, Minister of Trade and Industries, Hon. Freda Prempeh- Minister of State for Works and Housing. Adding up was the international partners from Canada and South Africa.

The queen mother of Gomoa Dago, Obaapanyin Aduafowaa represented people of the central region of Ghana.
Management of the chamber found it appropriate to honour his efforts in the midst of great personalities who graced the event.

He said he is passed the stage of post humour honours hence the need to honour Amb. (Dr.) Mike Oquaye Jnr. to let him know and understand how appreciative he is for all the support received on behalf of GITAC.
Amb. (Dr.) Mike Oquaye Jnr.is currently the Chief Executive Officer of the Ghana Free Zones Authority appointed by President Akufo Addo.
During his time as High Commissioner to India, he made lots of impact by promoting many business through GITAC and the Indian representatives both in Ghana and India.
His Global experience is mainly focused on emerging businesses and markets especially within countries such as UK, USA, ECOWAS Region, and South Africa.