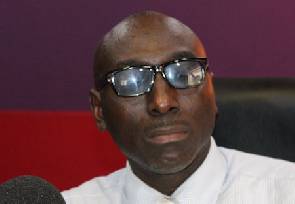 A lawyer with the governing National Democratic Congress (NDC) says a Commission of Human Rights and Administrative Justice (CHRAJ) report clearing President Mahama of taking a bribe should end any controversy surrounding the Ford gift saga.

Abraham Amaliba has rejected claims by the New Patriotic Party (NPP) that the report is nothing more than an attempt to whitewash the president.

He has urged the NPP to focus on outdooring its manifesto with the general elections only some 64 days away.

The NPP is crying foul after CHRAJ released the report last week which said the President violated the breached the country's gift policy in accepting the controversial Ford gift given by a Burkinabe contractor Djibril Kanazoe.

The opposition party is adamant that no amount of white wash will exonerate the president.

CHRAJ maintains that although the president broke his gift policy that sets a gift acceptance ceiling of $50 for members of his government, a case of conflict of interest or bribery cannot be established.

The president has claimed he donated the gift to the state and the luxury vehicle has been added to a pool at the Flagstaff House.

But the main opposition party's Communications Director says the party is holding on to its theory that the president took a bribe.
Nana Akomea

According to Nana Akomea, it cannot be coincidence that Djibril Kanazoe got his first contract with government after he was directed to see President Mahama then Vice-President in 2012.

He said other pieces of explanation supplied in the report does not add up.

For instance, the president claimed he had in November donated the car to the state which later fitted security gadgets required for vehicles used by the president.

But in November, the 2010 Ford Expedition vehicle was sent over to the Tema Port for registration in February 2013.

But by law the state does not pay taxes or declare duties on goods and services he said, thus demanded to know why the state would pay duty on a vehicle donated to it.

"It doesn't make sense" he said and suggested the vehicle was 'obviously' registered for private use.

But Abraham Amaliba has rejected NPP's persisting claim noting, "it doesn't lie in the mouth of the NPP to say the report is a whitewash".

He defended the integrity of CHRAJ's work and ruled out suggestions that the anti-graft body did a compromised work.

Amaliba noted that CHRAJ was the same body that investigated allegations of wrongdoing in the Hotel Kufuor saga and the propriety of renovation works done on the residence of then President John Agyekum Kufuor.

He could however not explain why the state would pay taxes on a gift that was already into the custody of the state.

As far as the CHRAJ report is concerned, no law was violated, Abraham Amaliba maintained.