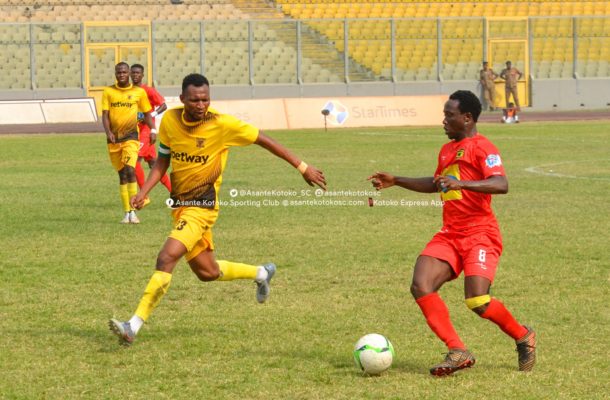 Kumasi Asante Kotoko continued their struggles at home against Ashanti Gold in the last game of their three game ban.

None of the two sides could find the back of the net despite both teams getting presentable chances to have broken the deadlock.

Even before the game could start, Kotoko were dealt a huge blow when influential midfielder Justice Blay was withdrawn from the squad after suffering from a late bout of malaria and had to be replaced in the starting eleven by Kingsley Effah.

Ashgold controlled the early exchanges of the game and took control of the midfield dominating play but could not carve open the Kotoko defence despite Emmanuel Baffour getting close on several occasions.

Both sides went into the break level with both sides unable to break the deadlock.

Kotoko grew stronger in the second half and had to take the lead when striker Maxwell Opoku Mensah was presented with a gift of a back pass from the Ashgold defence, with only the goal keeper to beat he dilly dallied instead of taking a shot and the goal stole the ball from his toes.

Emmanuel Osei Baffour also had some clear chances to have punished Kotoko but tamely shot into the arms of Kwame Baah.

Naby Keita also headed onto the goal post after a nice cross while the miners also had a late free kick from Appiah McCarthy which crushed the upright and both sides had to settle for a draw.