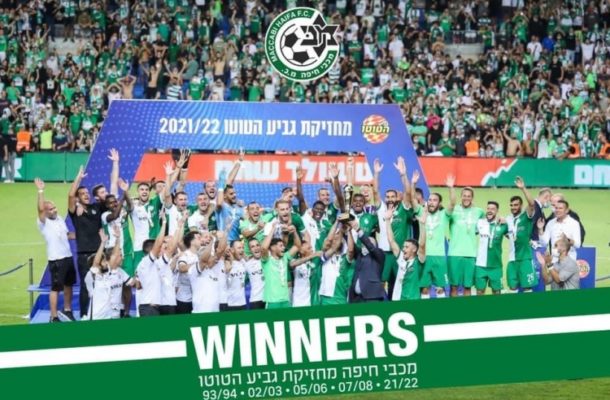 He was handed a start as his side defeated Hapoel Beer Sheva at the Netanya Stadium in a match which finished 1-1 in regulation time before it headed for penalty shoot out.

Beer Sheva opened the scores of the game as Mariano Bareiro scored on the stroke of half time to hand his side a deserving 1-0 lead.

Ghanaian forward Godsway Donyoh was substituted in the 60th minute but his replacement Dean David grabbed the equalizer for his side with five minutes left to send the match into extra time.

But with no one able to score it went into penalty shoot out with veteran Maccabi Haifa goalkeeper  Roei Mashpati  the hero after saving the decisive penalty to win it 7-6 for his side.

The trophy is Donyoh’s second major title since joining the club from Danish side FC Nordsjaelland in 2020.