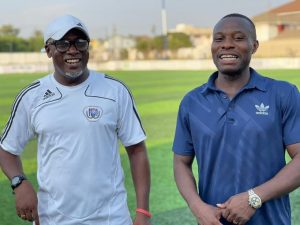 Accra Great Olympics have had their hands forced as midway through the season they have reluctantly replaced their technical team with new faces.

On Tuesday the club announced the appointment of former Ghana U-20, Hearts of Oak and Ifeanyi Ubah assistant coach Yaw Preko as their head coach with Olympics club legend Godwin Attram his assistant.

In the interim, the two former Black Star players will team up to continue the good work that was started by the impressive Annor Walker who has been sidelined by illness with his assistant Ibrahim Otoo also indisposed.

Until Attrams appointment as assistant coach he was with his lower tier side Attram De Visser Academy where he was horning and training talents for the future.

The club made the announcement to the playing body at a meeting held on Wednesday morning as to the new changes in the dug out.

Great Olympics have been in fine form this season chalking impressive wins against Kumasi Asante Kotoko, WAFA and a draw at Tarkwa against Medeama.

But in the absence of their inspirational coach they have lost their last two matches in the league to Aduana Stars and Ashgold.