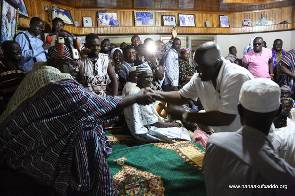 The Paramount Chief of the Kpembe Traditional Area, Kpembe Wura Babanye Ndefosu II, says the 2016 presidential candidate of the New Patriotic Party, Nana Addo Dankwa Akufo-Addo, will secure a good victory in the December presidential election, by a margin of not less than 53%.

According to the Gonja Chief, who was enskinned in August this year, “when I look into the crystal ball, I can see victory for the NPP. I want to assure you that I am still a friend, and you can always depend on me. As I said, if God wants to do something, He begins from one. He has done it for me, and He will do it for you.”

Advising the NPP flagbearer not to depart from his issues-based campaign, he urged Nana Akufo-Addo to continue to “tell the people of Ghana what you will do for them. The people of Ghana are ready to hear from you, and I hope the next time we meet like this, you will be His Excellency, Nana Addo Dankwa Akufo-Addo.”

The Kpembe Wura made this known on Thursday, September 1, 2016, when Nana Akufo-Addo, together with national and regional party stalwarts, paid a courtesy call on him at his palace in Kpembe, in the Salaga South constituency of the Northern Region.

Kpembe Wura Babanye Ndefosu II was certain that “the Lord, God, is listening to what we are telling Him today. There isn’t so much talk. God has done it. I have seen it (an NPP victory) in my dreams. Shaking hands with you this evening, I have seen something you haven’t seen.”

He, thus, urged the people of Kpembe, as well as the Ghanaian electorate, to turn out in their numbers on Election Day and vote massively, stressing that “I predict nothing less than 53% victory for you.”

In concluding, the Kpembe Wura asked Nana Akufo-Addo to look into the possibility of carving out another region from the Northern Region, to “enable the equitable distribution of the natural resources of the region, as well as the rapid development of the livelihoods of the citizenry.”

On his part, the NPP flagbearer thanked Kpembe Wura Babanye Ndefosu II for the warm reception afforded him, as well as his prediction of victory for him in this year’s election.

“I am so happy to be here, and to be able to congratulate you personally on your ascension to this famous skin of your ancestors, since I was unable to be present at the ceremony of enskinment. I know from our long years of personal friendship what you have been through in order to get here. I pray for wisdom and God’s guidance for you, and I am sure that, by God’s grace, your reign will bring prosperity and progress to the people of Kpembe,” he said.

Nana Akufo-Addo assured the Kpembe Wura that “even though I am not a blood brother of the Gonja people, I know I am coming to do a lot of good for the Gonja people. We are doing exactly what you have advised us to do. We are telling the people of Ghana the things we will do if, by the grace of God, they give us the opportunity.”

He continued, “I have been telling the people of Ghana that I will never get up and make a promise I know I cannot fulfill. I have too much respect and love for the Ghanaian people to lie to them. That is the message we have been taking around.”

With the 2016 election being his third attempt at the Presidency, the NPP flagbearer appealed for the support of the Kpembe Wura and the people of Gonjaland, stressing that “I want the opportunity to be of service to the Ghanaian people.”