Government delegation to meet US Ambassador today over deportation threats 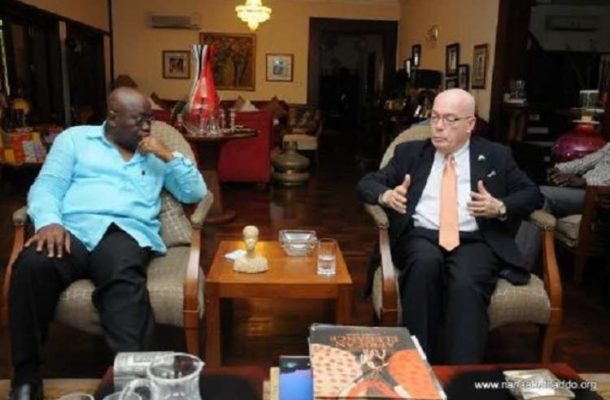 A delegation of Government Officials from the Ministry of Foreign Affairs will later today Monday, June 23, meet the US Ambassador to Ghana, Robert Jackson and other officials of the Embassy over the impending deportation of some 7,000 Ghanaians.

The meeting is aimed at finding a middle ground to the ensuing impasse between the US and Ghana government over the issuance of travel documents for some 7000 illegal migrants in the US.

The United States Embassy in a statement issued on Wednesday indicated that the government of Ghana was not complying with international obligations regarding the issuance of travel documents to Ghanaians awaiting deportation in the USA.

The statement said the US will be forced to begin implementing visa restrictions in accordance with its laws as a responsibility owed the American people.

Some have accused the US of trying to bully Ghana by the threat, but according to US Ambassador to Ghana, Robert Jackson, the US has fairly engaged Ghana on the matter.

He told an Accra based FM, "Citi News" that he has been holding discussions on the matter with government officials in the Mahama administration as well as the current Akufo-Addo government but nothing fruitful has come out of those discussions.

He, however, said he was ready for further engagements on the subject but is more interested in having the government of Ghana take action.