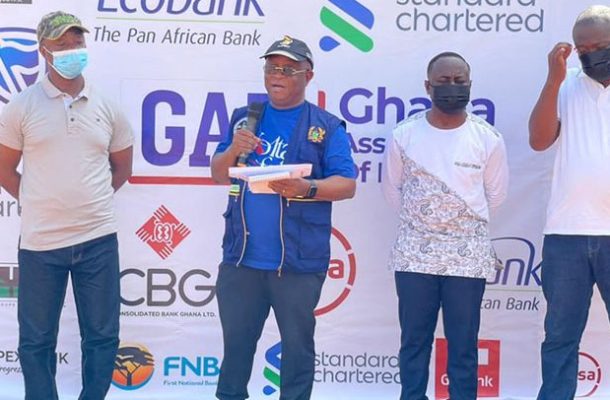 The Volta Regional Minister, Dr.Archibald Letsa has refuted claims that government has neglected the victims of the recent tidal waves in the Keta areas of the Volta Region.

He explained that government officials and authorities responsible are on the ground taking steps to support the people and find solutions to the problem.

“The President need not to be physically present on the ground since people he appointed are on the ground tirelessly working to relief the people from their plights,” the Volta Regional Minister stated that when he received some relief items from the Volta Tidal Wave Relief Fund (VTWRF) in collaboration with Corporate Ghana and Caring Sisters to victims of the tidal wave which occurred at Anlo, Keta and Ketu South Districts.

He commended the organizers of the Volta Tidal Wave Relief Fund for their support.

The relief items include three thousand mattresses and other bedding materials as well as some food items donated by Ghana Association of Bankers, MTN and Ashfoam at a short ceremony at the Keta Municipal Assembly.

Other items such as food supplies and cash were mobilized by “Caring Sisters of Anlo” and “Volta Tidal Wave Relief Fund’, while the Association of Bankers donated GHC 1,000,000 (one million cedis).

The Volta Tidal Wave Relief Fund was formed by some indigenous sons and daughters of the affected areas in the wake of the recent tidal waves that have displaced and destroyed properties as well as livelihoods in the Anlo, Keta and Ketu South District.

The aim of the Fund is to mobilize resources from individuals, associations and Corporate Ghana. It is also to raise funds to support the rehabilitation of public institutions such as schools destroyed by the ravages of the sea.
The items were presented to the affected communities through the Caring Sisters acting as Coordinators for the distribution.

Present at the ceremony were the Volta Regional Minister, Municipal Chief Executives of the three affected districts, Members of Parliament from the area as well as Traditional Rulers and Opinions Leaders.

Leading Member and Spokesperson for the VTWRF, Ken Ashigbey, expressed optimism that the support provided will ease the negative impact of the recent tidal wave on the thousands of people displaced.

He urged the various stakeholders to ensure equitable distribution of the relief items.

Another Lead Member of the VTWRF and a member of the Ghana Association of Bankers, Mawuko Afadzinu underscored the need for indigenes to mobilise support for their communities in times of distress hence the effort of VTWRF.

He commended the Volta Tidal Wave Relief Fund and Caring Sisters for the gesture which will mitigate the impact felt by those affected.