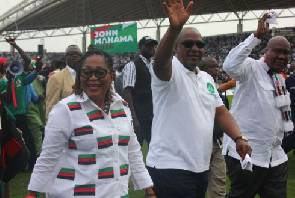 According to him, government has no intention to disrupt the social networking space before, during and after the December 7 polls.

President Mahama gave the assurance at the campaign launch of the NDC at the Cape Coast sports stadium in the Central region, Sunday.

His comment comes in the wake of pronouncements by the Inspector General of Police (IGP), Mr John Kudalor, that the police might consider banning the use of social media on election day.

That pronouncement has since attracted mixed reactions from the public and some civil society organisations (CSO).

But President Mahama is convinced social media will not create any confusion especially in the declaration of results.

He said the Electoral Commission and political parties will agree on the channel to announce the results and “that will be the only channel for credible elections results”.

President, however, bemoaned the continuous vilification of the EC by member of the opposition New Patriotic Party (NPP) when it fact it has supervised several elections leading to their victory.

He called on the party leadership to call their members to order to ensure a free and fair elections.