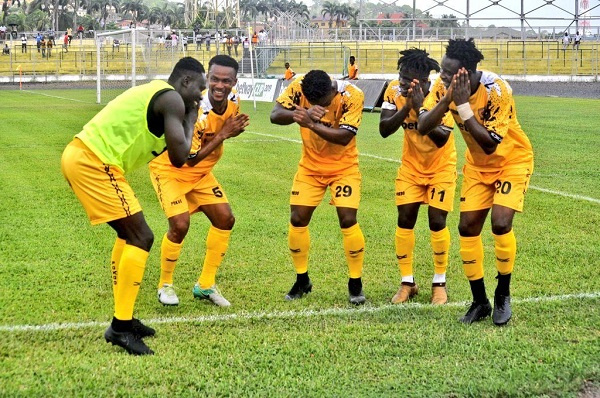 The honeymoon period for new Hearts of Oak coach Samuel Boadu is over as he lost his first game as coach for Accra Hearts of Oak since taking over the job.

Boadu took charge of his new side last month after resigning from his role at Medeama and has gone on to win matches against WAFA and Aduana Stars comfortably.

The game against AshantiGold was a real test for Hearts but they failed as a late penalty from Amos Addai consigned the phobians to defeat in their match week 19 clash.

Hearts of Oak started the game on the front foot but wasted the chances that came their way but the home side grew into the game as Yaw Anorl caused problems for the Hearts of Oak backline but could not score.

The capital giants had a penalty in the 15th minute after speedster Patrick Razak was upended in the penalty box up stepped Victor Aidoo who went for power but had his fiercely struck penalty saved by goalkeeper Kofi Mensah.

It was the second penalty saved by the former Karela United goalkeeper ever since he took the number one jersey at AshGold saving another penalty against his former side Karela United during match day 18 last week.

The first half ended goalless as neither side could score with the miners the happier of the two sides.

Both sides cancelled each other out in the second half with chances far and few among both sides.

It appeared the game was heading for a draw until the home side were rewarded with a penalty kick after Hearts captain Fatawu Mohammed was adjudged to have handled the ball.

Amos Addai made no mistake as he expertly tucked home in the 92nd minute to hand the home side all three points.