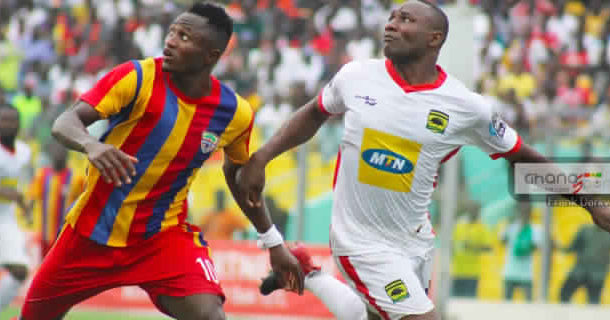 Across the length and breadth of Ghana, from Gambaga to Accra and from Wiawso to Keta – several great matches are set to take place, with some of the biggest stars involved across the various league centres.

Hearts and Kotoko will square off in another super clash; Berekum Chelsea and Aduana will do same in another B.A derby. There are a whole host of other great matchups and fascinating fixtures, and you’ve got another brilliant weekend of Ghanaian football action.

Kindly read on for previews of all the matches this weekend in the Ghana Premier League as well as predictions on which teams will likely emerge victorious. As usual, I will end up by giving my accumulated odds for the weekend.

Yet, there is no other match in African football this weekend more fascinating and compelling than that of Hearts and Kotoko especially given all that’s taken place lately. The Phobian club begun their league campaign on the low losing their first two consecutive games against clubs which surprisingly handed defeat also to their arch-rivals in the 3rd and 4th week of the GPL. Coach Odoom has bolstered his squad with new signings and has ensured that Hearts will not lose in their last 3 games bagging 7 points in the process. Hearts sees this period as a golden opportunity to be playing a not so well enticing Kotoko particularly after signing players like Emmanuel Nettey who was outstanding in their game against Liberty professionals. This should not be the case as the ‘Fabulous’ club, on the other hand, have an experienced coach in Maxwell Konadu who never lost against Hearts in his first stint with the club.

Even though generally Hearts has improved on their depth of squad, it’s however worth noting that the current Kotoko squad has much more experience as far as the clash is concerned. The likes of Emmanuel Gyamfi and Justice Blay, for instance, have played in several clashes of such nature and in games like these, it could count as very crucial. The porcupine warriors have imposingly lost just a single game at the Accra Sports Stadium since 2011. Losing only to a lone Vincent Atinga penalty in the 2017 week 8 league fixture. In effect, Kotoko seems to be playing at a very comfortable ‘home’ far from home. This is a fixture that can go either way but I expect both clubs to be playing to avoid a defeat in these early stages. A full-time draw is probably the best this game will offer.

But for the aura the super clash commands, this fixture deservedly should have been the most talked-about fixture in this weekends’ line up. Much so not only because it’s a meeting between two giants in Brong Ahafo but because currently, it’s a meeting between the two best teams so far as the league ladder is concerned. Berekum Chelsea’s backline including the impressive Kotoko goalkeeper loanee, Ibrahim Danlad has ensured that the Blues are yet to concede a goal in the league. Chelsea have virtually beaten all the teams that matter so far in the league and have options on the bench which ensures that they are able to adapt well at every grounds and cause sufficient problems for any opponent. Aduana stars are counting on their top marksman and the top goalscorer in the league Yahaya Mohammed to continue with his scintillating form. The lad has six goals so far in the league none of them in an away fixture though. Will he be able to lead Aduana for Chelsea to concede for the very first time? And will that be enough to ensure that they become winners? This is why Saturday will be so crucial but expect the Berekum lads to continue with their impressive start and win the B.A derby!

The Red Bull Arena in Sogakope will witness beautiful football as the scientific soccer lads visit WAFA. This is a game for all football-loving fans and the neutrals. WAFA is a delight to watch anytime they play and expect them to come all blazing especially when they dropped points at home to Hearts in their last previous encounter at Sogakope. They will be determined in ensuring that they gain all maximum points in the early kick-off encounter. Alternatively, Liberty Professionals showed a lot of promise when they went all guns blazing to pick up a point at risky grounds as Berekum. But for the last five minutes at home against Liberty, we will be backing them to cause an upset in Sogakope. I expect WAFA to win this game with a slim margin.

Legon Cities have a beautiful opportunity to win for the very first time in the league. They have so far branded themselves very well in ensuring that the league has become very attractive. Truth be told, Legon Cities were very unlucky with the kind of fixtures they were handed in their first five league matches. Comparatively this game offers them a much better opportunity for their first win of the season. This is not to say that Bechem aren’t worthy opponents but they are a side that Legon Cities are likely to beat especially when Bechem United are yet to register an away win in the league. It’s quite certain that apart from Medikal performing on the night another likely event will be that the cities will be running away with all maximum points. Legon cities to win is a banker at a juicy odd of 1.60.

The Arkoon Park in Tarkwa will be as they put it ‘the stadium of attraction’ as Medeama SC welcomes the wounded AshantiGold FC. This fixture could have easily passed as the fixture of the week had the visitors not lose at home against Chelsea in their previous encounter. This fixture golden not only because the clubs are from well-known gold mining towns in Tarkwa and Obuasi but are in themselves genuine title contenders. Medeama have made their home a fortress and will do everything within their means to acquire all maximum points. Expect this encounter to be very physical with both teams going in very strong in aerial abilities. Nevertheless, I don’t see Medeama losing at the Arkoon Park.

The last time Medeama lost a game at home was back in 2017 against non-other but the Aboa Kese lads surprisingly that’s the only game Medeama has ever lost to Ashanti Gold at home since 2011. /

Medeama has won all their last 17 games at home and that sounds very impressive. We expect that winning streak at home to continue this weekend.

The Accra Sports Stadium will witness a derby of a sort with Accra Great Olympics playing host to Inter Allies. This is a game many Agorsu fans will expect Olympics to win easily because of the improvement their team led by coach Prince Koffie have shown in their last two games. The firm decision taken by the coach to drop the experienced Emmanuel Clottey on the bench and making him a super sub seems to be working perfectly well. The rivalry will be intense but we expect the ‘flavour boys’ led by their captain Gladson Awako to cause a demolishing against Inter Allies.

At the Baba Yara Sports Stadium, Kumasi King Faisal will be seeking their very first win in the league this season after scoring 5 and conceding 10 goals in the process. They play host to the Sharks from Elmina. Two clubs with attention-grabbing personalities in Alhaji Grunsah and Kwesi Ndoum. Sharks have proven they could be dangerous on the road with their away win against Inter Allies. This is a game *that’s likely to see a lot of goals since both teams play very beautiful attacking game and are not afraid of going forward. Over 2.5 goals is somewhat a juicy offer going for 1.90 odds. Both teams to score is another option punters could choose.

Eleven Wonders are the overwhelming favourites as they welcome Karela at the Ohene Ameyaw Park. After winning at home against Aduana Stars, Eleven Wonders have proven that they are in the league to stay for good. Karela are not good travellers and expect them to be trashed by the home side. This is expected to be an easy win for Eleven Wonders. We expect them to get a clean sheet at home.

Last but not least we will be witnessing Premier League action on Monday evening for the very first time in many years at the Cape Coast Stadium as Ebusua Dwarfs welcome Dreams FC. The last time they met in Cape Coast, the Easterners were victorious by 2 goals to 1. Dreams are yet to lose a game away to Dwarfs. The Ebusua club is yet to register a point in the league so far and it’s going to be very difficult for them to win or even pick up a draw at home to a Dreams side which has conceded just two goals in the league so far. The story hasn’t been so far good at all for Dwarfs. If they’re to continue their shambolic display they would have to kiss goodbye to the nations’ finest league. I predict a win or draw for Dreams FC.