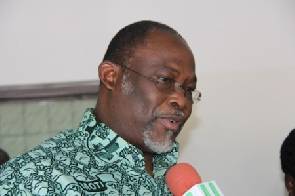 The Minister for Trade and Industry, Mr Ekow Spio-Garbrah, has urged officials of the Ghana Revenue Authority (Customs Division) to apply the correct of Rules of Origin in their transactions with exporters and importers along the different trade routes in Ghana.

In a speech that was read on his behalf by the Chief Director of Ministry of Trade and Industry (MoTI), Mr Dawarnoba Baeka, he said since the Cotonou Agreement, Ghanaian exporters had been benefiting from the preferential access when using the correct Rules of Origin.

This was at a workshop on rules of origin which was organised by the European Union under its Trade Related Assistance and Quality Enabling Programme (TRAQUE).

He said studies conducted by MoTI had indicated a general lack of knowledge on the use and implementation of the EU Rules of Origin by government officials and private sector operators, which hampers Ghana’s competitive position in the EU market.

He said while negotiations were ongoing to harmonise the non-preferential rules of origin, the proliferation of preferential trade agreement represented an important concern in terms of customs revenue.

The Minister said though intended to facilitate free trade, promote local investment and protect sensitive local industries from 'unfair' competition, there was increasing evidence that preferential rules of origin regimes were overly complex and imposed unintended consequences for businesses.

The training workshop is part of support the EU funded TRAQUE Programme is providing to the Ghana Revenue Authority (Customs Division) in order to efficiently implement and verify the EU Rules of Origin and correctly deliver the correspondent proof of origin.

It is also expected to enable the GRA assess current application of the rules of origin, challenges and needs for it to adjust to new situations.

Mr Spio-Garbrah said the training workshop was aimed at enhancing the understanding of participants and correct application of Rules of Origin as stakeholders stimulate economic growth.

A Rules of Origin Expert, Mr Martin Wilde, said many exporters did not use the rules and these made them pay more tariffs than they should.

He said the Rules of Origin were used to determine the country of origin of a product for international trade, adding that 'the basic role of Rules of Origin is the determination of the economic nationality as opposed to the geographical nationality of a given good.'

According to him, there were several mandatory legal or administrative requirements to observe when goods were traded on the international market.

He said there was the need to equip the country's revenue collection agencies to be able to meet internationally accepted standards for exports.

'So it is a case of raising awareness and putting policies and regulations in place to ensure that both customs and traders apply the rules correctly,' he added.

The training workshop is expected to be replicated in Tema, Aflao, Tamale, Kumsai, Elubo and Takoradi