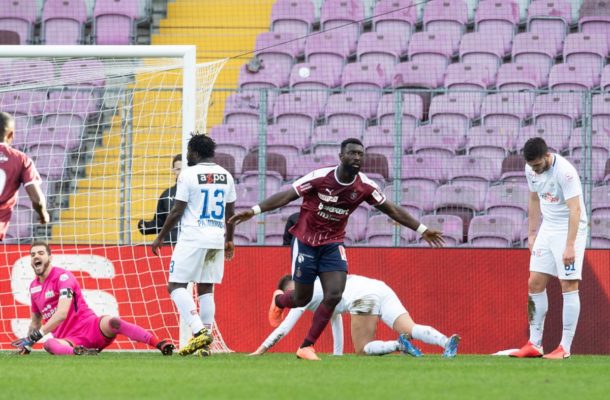 French born Ghanaian striker Grejohn Kyei was on the scoresheet for his side in Switzerland in a game that produced 6 goals on Wednesday.

The match which was played at the Stade de Suisse went in favour of the home side BSC Young Boys who won by 4-2.

It was a game littered with goals as the floodgates was opened by the away side on the stroke of half time by Koro Kone but the home side quickly responded before the teams headed for the half time break.

With five minutes added onto the first 45 minutes Christian Fassnacht pulled parity for BSC Young Boys with a calm finish.

Young Boys upped the ante in the second half and their performance was duly rewarded when they took the lead for the first time in the game through Christopher Martins in the 56th minute to make it 2-1.

Elia Meshack put the game beyond the away side when he side footed home the third goal for BSC Young Boys to make it 3-1 in the 61st minute.

Up stepped Grejohn Kyei who was introduced as a 64th minute substitute for Boris Cespedes and four minutes time he scored the second goal for the away side making the last 25 minutes a nervy one for the home side.

In stoppage time, the home side put the game beyond Servette when Jean-Pierre Nsame  netted the 4th goal for  BSC Young Boys.

Grejohn Kyei has scored three goals for his side in 21 appearances while providing three assists.