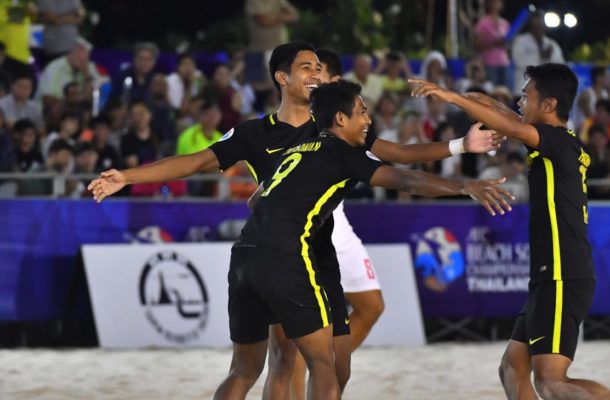 Pattaya: Malaysia gave themselves an AFC Beach Soccer Championship Thailand 2019 lifeline, beating host nation Thailand 5-4 in a classic encounter to move to second place in Group A on Saturday.


Malaysia were 5-1 up in the dying stages, before Thailand scored thee goals in the blink of an eye in a superb comeback which fell just short of forcing extra-time.

Mohammed Faizal So'od's team have now leap-frogged Afghanistan, who have two points, and Malaysia can confirm their presence in the tournament's last eight with three points against Palestine on Monday.

Thailand, very much on the brink of elimination, will seek their first points against Afghanistan in the last of the group's fixtures.

It was Thailand who made the early running, and they nearly scored from a Komkrit Nanan bicycle kick just two minutes in, but their Southeast Asian rivals took the early lead through Mohamad Norazman, who stroked a penalty into the bottom corner in just the fourth minute.

Having secured zero points between them on day one, both sides knew another failure could have grave consequences for their quarter-final hopes, and Thailand suffered a severe blow in the 10th minute, when a dreadful mix-up allowed Mohd Ridhwan the luxury of scoring into an empty net for the visitors.

Malaysia were flying when Mohd Hasrol touched in Qushairie Asaari's drive across goal, with the host nation staring down the barrel of another defeat at 3-0 down at the first break.

With their campaign in the balance, Thailand eagerly sought a way back into the contest, and - following a string of saves from Malaysian goalkeeper Nazri Sulaiman - a stunning Kittin Lorjanad overhead kick into the top corner gave them hope, and their first goal, in the 20th minute.

Another defensive mix-up gave Muhammad Syarif a fantastic chance, only for a last-ditch clearance from Manus Madtoha to prevent what looked like a certain goal, but Malaysia still found a way, with Qushairie netting a free-kick with just 10 seconds on the clock to deliver a hammer blow to the hosts, and make it 4-1 at the final break.

Another close-range goal from Hasrol, who flicked in a Norazman effort that skipped disobediently across the sand, gave Thailand a mountain to climb at the beginning of the final period, but Thakorn Wikayaphan gave them hope when he bundled in the rebound after one of many saves from the brilliant Nazri.

Tanandon Praracha reduced the deficit further with a free-kick in the 34th minute, and Komkrit ensured a grandstand finish when he dramatically made it 5-4 with just a minute remaining.

The Thais gave it their all, but it was a case of too little, too late for the hosts, as Malaysia held on to secure a win which drastically changes the complexion of their tournament.
Mohammed Faizal So'od, Malaysia head coach

"We won this match when our players managed to score early goals. After that Thailand kept coming and tried to score and it was difficult for us to defend. Our fast counter attacks managed to get us goals. It's bad luck for Thailand who tried their best, but it's our lucky day."