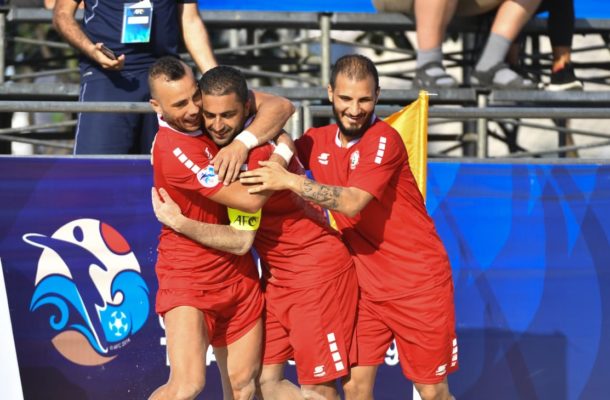 
A seven-goal final period rampage sealed the win for Lebanon, who are chasing a first appearance in the FIFA Beach Soccer World Cup by finishing as one of the top three sides in Pattaya.

With six points from two matches, the win takes Lebanon to the top of Group B, while Kyrgyz Republic are eliminated after back to back losses.

Lebanon's early onslaught played a key role in deciding the game, and they opened their account through Hussein Abdullah in the fourth minute, before a superb overhead kick from Hassan Kadi made it two a minute later.

Haitham Fattal continued his strong start to the tournament when he finished off a lovely passing move in the seventh minute, but Kairat Duisheev - who scored Kyrgyz Republic's only goal against the UAE on Thursday - pulled one back for the Central Asians to make it 3-1 at the first break.

The match continued on Lebanese terms, but Kyrgyz Republic succeeded in reducing the regularity of clear cut scoring chances, forcing Alex Braga's side into more long range efforts, many of which flew over the crossbar.

Mohamad Merhi bucked the trend when he picked out the corner with a free-kick from distance for Lebanon's fourth in the 21st minute, and an injury to keeper Maksim Maksimishkin further dented Kyrgyz Republic's hopes in the final moments of the period.

Their fate was sealed when Abdullah nonchalantly headed home his second for the afternoon, and fourth for the tournament, in the 25th minute, before Mehri rocketed home a free-kick minute later.

Sameh Jalal beat Ermek Chabaliev with another free-kick, before Mohamad Mechleb Matar easily scored Lebanon's eighth, and Fattal made it three goals in a minute when he made it nine, with Aktilek Uulu Abdykalyi's goal bringing a brief moment of joy for Kyrgyz Republic.

The goals continued to flow, with Kadi and Merhi both added to their personal tallies after Bakyt Zhanaliev was shown a late red card to put the seal on a thumping win.

Lebanon's next task is a rematch with their 2017 semi-final conquerors United Arab Emirates, while Kyrgyz Republic will continue the hunt for their first ever AFC Beach Soccer Championship points against China PR.
Alex Braga, Lebanon head coach

"Firstly, all my respect for Kyrgyz Republic. They are new in this game and they deserve all my respect. We replaced many players due to the weather, and in the third period, sure, (Kyrgyz Republic) lost their power because we are used to training in this weather."

"We congratulate today's winner. In this championship we are lucky to play with strong teams like Lebanon and we take it as a new experience for our future improvement in beach soccer. The weather also influenced us because it is so hot, but we hope that in the next game with China we will score more. "