Gyan missing in court over rape and sodomy case 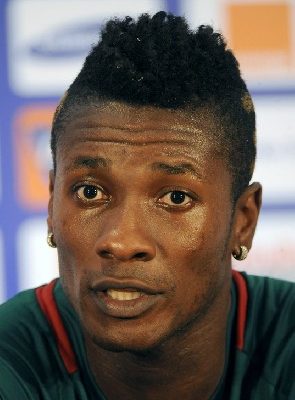 Asamoah Gyan, who is a witness in the case to testify whether he raped and sodomized Sarah Kwablah, is missing in Court.

It is to be noted that if Asamoah Gyan refuse to appear in Court, the court will consider whatever testimony Sarah as facts and for that matter, rule that Gyan indeed raped and sodomized her.

Richmond Ayayi, the CID who investigated the ongoing trial involving 4 suspects; Osarfo Anthony, Chris Handler, Sarah Kwablah, and Ekow Micah, alleged to have connived to extort money from the Black Stars captain, Asamoah Gyan, is also in hot water for tendering an amount of dollars as exhibits to the court amounting to 1,000 dollars – but the money ended by being short of 100 dollars after the court clerk counted the money in open court.

According to GhanaPoliticsonline.com court reporter Banda nii sackey Inusah, Richmond Ayayi appeared in court to testify as the investigator into the matter some weeks ago. On the first day of testifying, he ended up fumbling in court as he speaks – opening himself to laughter from the audience in court and the judge alike.

The prosecutor therefore, pleaded with the court to adjourn the case for the CID to refresh his memory so he can testify well to the court and was upheld by the trial judge her Lordship, Afia Agbanu Kumador.

Evidence Tendered In Court By CID

On Thursday, 28th July, 2016, the CID tendered in chief, the below evidences to the court: charge and caution sheets of all four suspects, chats (Whatsapp) of one of the suspects, signed sheets of extortion money recorded with serial numbers, and the extortion money of GHC 20,000 – which included 1,000 dollars.

The court clerk took the dollar notes, counted them – only to realize the amount is 900 dollars and not 1,000 dollars as the CID had told the court. When asked why the shortage of 100 dollars from the money, the CID stood there dumbfounded – only for the prosecutor to plead for an adjournment for them to put their ‘house’ together well for next hearing – which was granted by the court.

The CID also tendered in chief, an evidence which he claimed is a receipt from Osarfo Anthony to Asamoah Gyan – – a revelation that again made many in court burst out of laughter, perhaps, because people who extort money from their victims don’t issue receipts.

So if Osarfo issued an official receipt to the black stars captain, then it suggest that both parties had a formal business transaction of a sort – so why the extortion charge against Osarfo Anthony? “Do people who extort money from their victims issue out receipts?” lawyer Maurice Ampaw is likely to ask the CID under cross-examination in the next hearing of the case.

Last week, Thursday, 4th August, 2016, the CID appeared in court again only to tell the judge that he couldn’t find the 100 dollar note to present to the court. Asked when he can bring the money, he pleaded with the court to give him up to the end of August but the trial judge did not grant so.

The CID told the court that after taking the money as exhibit from Osarfo, he brought it to the police station, recorded all the serial numbers of each of the 100 dollar notes and made Osarfo sign to it – so now that 100 dollars is missing from the money, a very tight knot hangs around the neck of the CID to produce the same 100 dollar note with the same serial number on it and present to the court.

Background of CID
 
Richmond Ayayi is amongst 3 other police officers who work at the Airport Police station who were arrested for allegedly stealing GH¢1.36 million and 974 grammes of gold valued at GH¢2.1 million belonging to five Indian businessmen. Richmond Ayayi is currently on interdiction. Next Hearing

The next court hearing is on 18th August, 2016 – where the CID is expected to produce the 100 dollar note with the same serial number on it to make his 1,000 dollars exhibit to the court complete – else the court may thrown out his exhibits from the court’s records.

On Thursday 15th October, 2015, the complainant in the case – also the manager of Asamoah Gyan, Samuel Anim Addo, told the court that Osarfo Anthony and Sarah Kwablah sent him and Asamoah Gyan threatening messages respectively to extort money from Gyan. The court therefore asked him to tender those messages in court as evidence.

On Monday 26th October, the prosecution led by ACP Moses Atibilla, brought the printed messages and asked Samuel Anim if he is indeed tendering those messages as evidence in court and he responded, “Yes my lord.”

The printed messages bore no name or number of Osarfo Anthony. The counsel for the accused persons led by celebrity lawyer, Dr. Maurice Ampaw, cross-examined Samuel by asking the latter to prove to the court that the messages he is tendering as evidence, was truly sent to him or Asamoah Gyan by Osarfo.

In what became a courtroom drama, neither the prosecutor nor Samuel Anim, could prove or indicate to the court that the said messages were sent by Osarfo Anthony. The trial judge therefore, threw out those evidences against Osarfo Anthony.

The facts of the case are that an alleged sodomy story involving the skipper of the Black Stars, Asamoah Gyan, broke in the Ghanaian media. The prosecutor stated that Sarah alleged in a publication that Asamoah Gyan had a sexual affair and unnatural carnal knowledge of her.

ACP Atibilla indicated that Sarah discussed the issue with Ekow Micah and the two met with Anthony and Chris to publish the story on their website to scare Asamoah Gyan to give them money. The prosecutor further told the court that a witness in the case, Nii Armah Armateifio, who works at 3 FM, read the story on GHbase.com and quickly alerted Samuel to enable them stop the publication.

Feigning Of Interest By Complainant

As a result, the prosecutor disclosed, Samuel feigned interest to pay and when the publishers were contacted, they in consultation with Sarah and Micah charged a fee of GH¢30,000. Samuel bargained with the publishers and they settled on GH¢25,000, which the complainant agreed to pay at a meeting at Spice restaurant in Dansoman.

ACP Atibilla noted that Samuel, after the arrangement, reported the case to the police. He said on July 29 Samuel met Osarfo at the restaurant for payment, where an amount of $1,000, GH¢6,000 and a cheque of GH¢15,000 were paid to him.

The police officer stated( Ghanapoliticsonline.com) that Anthony was arrested after receipt of the money by the police and the others were subsequently arrested.