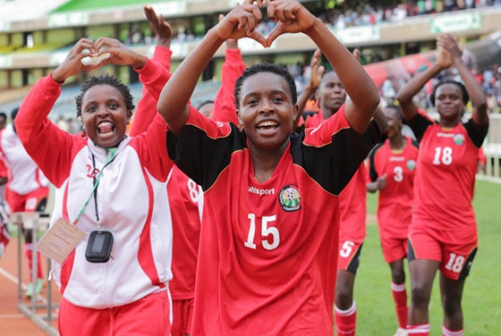 Kenya's national women's football team is aiming to conquer the African continent and be among its three representatives to qualify for the 2019 FIFA Women's World Cup in France.

Football Kenya Federation (FKF) President Nick Mwendwa says despite short notice, the team will be well prepared for the Africa Women's Nations Cup (AWCON), which starts in Ghana on November 17.

Speaking in Nairobi, Mwendwa said the success of the national team would give the local women's league the impetus it needs to help it flourish.

Kenya have a budget of 480,000 U.S. dollars for the two-week competition, which includes friendly matches against Uganda and Ghana.

"I have high hopes for this team. The focus for us is to qualify for the women's FIFA World Cup," said Mwendwa on Monday in Nairobi.

"This team continues to smash the glass ceiling. In 2016, we made our first showing at the AWCON and now, two years later, our targets have grown and we are eyeing qualification for the World Cup."

Kenyan fans are optimistic that the squad, led by coach David Ouma, will be going to Ghana to make amends for previous mistakes, after losing all three of its preliminary matches in the 2016 tournament in Cameroon, going down 4-0 to Nigeria and 3-1 to both Ghana and Mali.

"The Uganda friendly is confirmed and we will also play Ghana in Nairobi on November 7 before heading to the AWCON finals," he said.

In this year's event, Kenya will be up against defending champions Nigeria, South Africa and Zambia. The Harambee Starlets launch their campaign against Zambia on November 18, then face South Africa three days later before finishing off against Nigeria on November 24.

Equatorial Guinea, who were champions in 2008 and 2012, will not play in this year's competition after being disqualified for fielding an ineligible player during their qualifying win over Kenya.

The Kenya team is currently at a training camp in Nairobi with a provisional squad of 32, of which six play their club football overseas.

Corazon Aquino, Teresha Engesha, Mary Kinuthia and Christine Nafula all play in Sweden, while Marjolene Nekesa plays in the USA and Esse Akida turns out for an Israeli side.

The final 24-player squad to make the trip to Ghana will be announced next week.