Have hope in Ghana – Akufo-Addo to Ghanaians 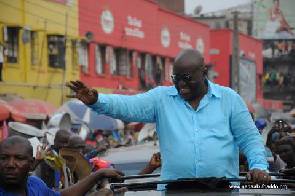 Nana Akufo-Addo has urged Ghanaians to have hope in Ghana despite the “misery” they are going through under the Mahama administration.

“Ghana and Ghanaians have become too miserable. However, I am urging you to have hope. God did not create us to be poor, neither did He put us on this rich land to be poor. It is bad leadership that is making us poor. Have hope that a good government is on its way coming to bring development, progress and prosperity to every part of the country without discrimination,” the three-time presidential nominee of the New Patriotic Party said on Saturday, August 13, 2016, when he began day 4 of his 5-day tour of the Western Region in Agona, in the Amenfi Central constituency.

The NPP flagbearer noted that many Ghanaians, in the face of severe economic hardships, rising cost of living, high utility tariffs, widespread and rampant corruption, amongst others, have lost hope in the ability of the nation to provide them with a decent standard of living.

Nana Akufo-Addo said in spite of the myriad of problems confronting Ghanaians under the John Mahama government, he is coming into office to create jobs for the teeming masses of unemployed Ghanaian youth, ensure access to education to all school-going children, and provide quality healthcare delivery for all citizens.

“The industrial development of Ghana will be my main project when, God-willing, I come into office. Helping to establish one factory in every district across the country will be a priority, which will create jobs for our unemployed youth. Additionally, free SHS is also coming to Ghana. The revival of the collapsed NHIS to ensure year-round, affordable access to quality healthcare will also be done,” he said.

With particular reference to the people of Agona, whose mainstay is cocoa farming, he indicated that “we are coming to restore the cocoa industry back to where it ought to be”, explaining that “after President Kufuor left office, the cocoa sector is in decline”.

Nana Akufo-Addo reassured citizens of Agona, and Wassa Amenfi, that “when I win this year’s election, I am coming to increase cocoa production again and raise up the standard of living of cocoa farmers. Mass spraying brigades will be formed again, to ensure that everyone involved in the cocoa sector is put back into employment. The timely and proper supply of fertilizer to enable farmers increase their yields will also be done.”

Citing the example of Ghana’s western neighbour, which has the same acreage of land under cultivation as Ghana, the NPP flagbearer noted that, Cote d’Ivoire in the 2014/2015 crop season produced 1.7 million tonnes of cocoa, with Ghana struggling to produce 700,000 tonnes of cocoa.

This, Nana Akufo-Addo, noted does not bode well for Ghana’s development, stressing that “the time has come to change these statistics and bring prosperity to all parts of the country.”

Prior to addressing residents of Agona, the NPP flagbearer paid a courtesy call on the Chief of Agona, Nana Akwasi Brumiah Sekyeresu, to introduce himself formally to the Chief and solicit his support and that of the people of Agona for his candidature in this year’s elections.

The Agona Chief noted that his constituents, since the advent of multi-party democracy, have voted for the NDC and their respective candidates, without any commensurate development of the town and the livelihood of its citizens.

To this end, Nana Akwasi Brumiah Sekyeresu stated that the people of Agona were fed up with this development, and are determined to put things right by voting massively for the NPP.

“The Presidency is not for one man or one party. After eight years, every party must leave for another to take its place, so they can also show Ghanaians what they can do. We have suffered for too long, we are hungry and there is too much hardship in the country. We know that when Nana Akufo-ASoddo wins, he will help Ghana and bring prosperity to Ghanaians,” he said.

Nana Akwasi Brumiah Sekyeresu continued: “I am saying this to the hearing of everybody. This year, Amenfi Central will vote for Nana Akufo-Addo. I am saying this because of what we have all been witnesses to (over the last 24 years). Be rest assured, Nana, we will vote massively for you.”