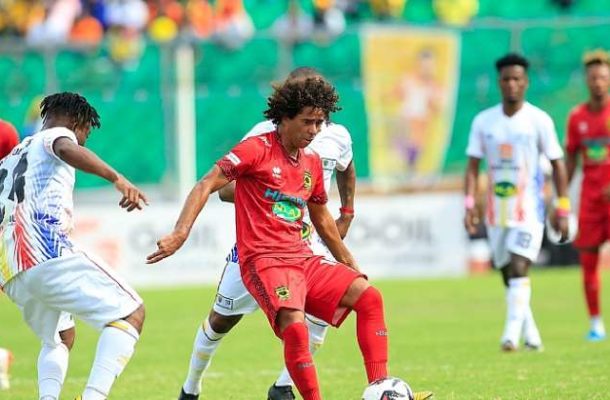 There was controversy in the just ended Ghana Premier League match day 24 clash between Kumasi Asante Kotoko and Hearts of Oak.

Asante Kotoko won the said game 1-0 at the Baba Yara Stadium but it was not without controversy as the penalty which was awarded and converted by Frank Mbella was contentious.

Center referee Kennedy Paddy bore the brunt of a lot of Hearts of Oak supporters as he deemed a shove on Kotoko's Fabio Gama from Hearts midfielder Abdul Aziz Nurudeen a foul and a penalty.

Many were of the view that it was a soft penalty and should not have been given but Frank Mbella converted and handed Kotoko all three points.

Subsequently the referee was handed a ban by the match review panel after Hearts lodged a complaint with the GFA.

Hearts midfielder Abdul Aziz Nurudeen has finally opened up on what transpired on the pitch and what Fabio Gama told him.

“After the game, Gama told me he has not seen a defensive midfielder who is skillful like me," he told Accra-based Angel TV.

"He also said I am a stubborn midfielder so he used tricks to win the penalty," he added.

Hearts of Oak were unable to finish in the top four at the end of the Ghana Premier League campaign.