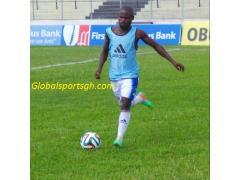 Hearts of Oak are reported to have signed Liberty Professionals defender Anthony Nimo.

The talented right back has penned a two-year deal and seen as a perfect replacement for Fatau Mohammed who is set to be released.

In July this year, it was reported by the local media that Nimo had joined Turkish lower division side Musspor FC.