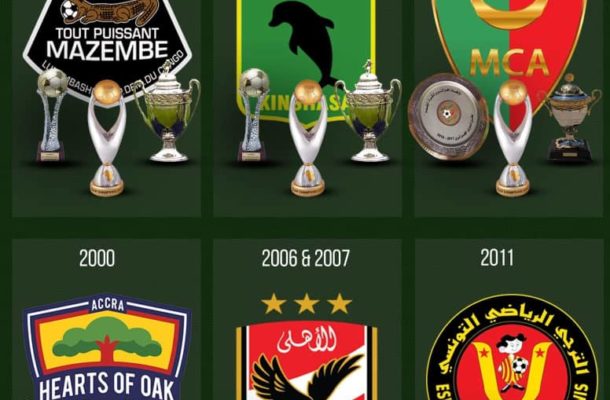 Accra Hearts of Oak have joined an elite list of clubs on the African continent to have won the famous treble in history.

They are the only club in West Africa to have achieved the feat on the African continent joining the likes of  Al Ahly of Egypt, Esperance de Tunis, Mouloudia Club d'Algers.

Others on the famous list include Congolese duo of TP Mezembe and AS Vita who complete the list of  six teams who have all won the treble with Hearts included.

The Phobians in the year 2000 under the tutelage of the late Sir Cecil Jones Attuquayefio swept clean every trophy they played in winning the CAF Champions league, the Ghana Premier League and the FA Cup that year.

It was not until 1967 when then TP Englebert which has now metamorphosed into TP Mazembe won the treble for the first time on the African continent before their rivals AS Vita club repeated the feat in 1973.

Algerian side MCA or Mouloudia Club d'Alger then followed suit when they clinched the treble in 1976 before Ghanaian giants Hearts of Oak repeated the dose in 2000 before Egyptian side Al Ahly did it twice in two successive years 2006 & 2007 before Esperance the last of the special breed to have achieved this feat in 2011.

The treble has been a measure of class for a club as winning all domestic and continental trophies is deemed an achievement.

In Europe elite clubs such as Machester United, Bayern Munich, Inter Milan among others have achieved this feat.