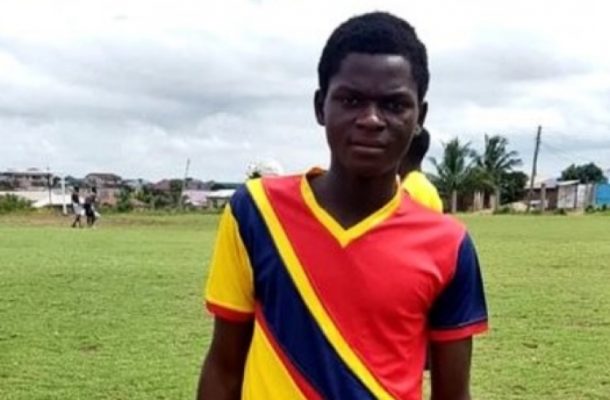 Auroras lead striker, Franklyn Owusu has been promoted to the Accra Hearts of Oak senior side upon the recommendation of head coach Edward Odoom.

The young starlet recently earned a callup to the Ghana national U-20 team and, it is testament of his improved form since joining our youth set up some three years ago.

The striker was the main marksman in the Auroras setup and has seen his performances improved since he joined prompting the national U-20 selectors to include him in the squad as they prepare for upcoming assignments.

Owusu will now join the Hearts of Oak squad when training resumes in preparation for the new season. This will be a continuation of his development as he takes further steps in becoming a mainstay at the club.

“I am a very ambitious person and always wants to take up challenges and, I see this one as another opportunity to prove my worth at the senior team of this great club”, Owusu told Hearts Media.

Owusu is rated highly by Hearts’ head coach Edward Odoom who throughout the cancelled season of 2019/20, invited him to train with the first team.

“We will continue to work on him now that he is with the first team, and, I am very confident that going forward, he will become an important player for the club”, Coach Odoom said of the striker.

Owusu hails from Ejisu in the Ashanti region of Ghana and began his football career with Koto Stars a youth side in Sefwi in the Western north of the country.

He attended the Ejisu Secondary School where he stared for the school team and he idolizes Ghana’s all-time leading goal scorer at international level Asamoah Gyan.