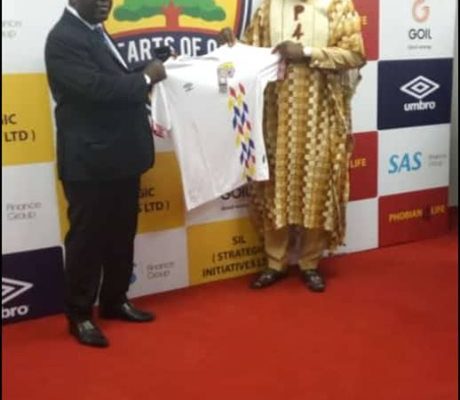 A replica jersey of Ghana Premier League side Accra Hearts of Oak has become the most expensive piece of sportswear after it was purchased at Ghc20000.

The garment was snapped up for GHC5000 but the aspiring GFA president outbid interested parties by paying thrice the amount for the first shirt on offer.

The well-attended event was held at the Media Centre of the Accra Sports Stadium on Wednesday, bringing together  some prominent members of the Phobian fraternity.

Club captain Fatawu Mohammed, defensive stalwart Mohammed Alhassan and Josep Essog where some of the players who modeled in the new kits to give fans a little peak of what to expect when the season begins.

The Ghanaian powerhouse joins an exclusive list of clubs including Everton, Huddersfield Town, Werder Bremen and FC Nürnberg who are being kitted by Umbro.