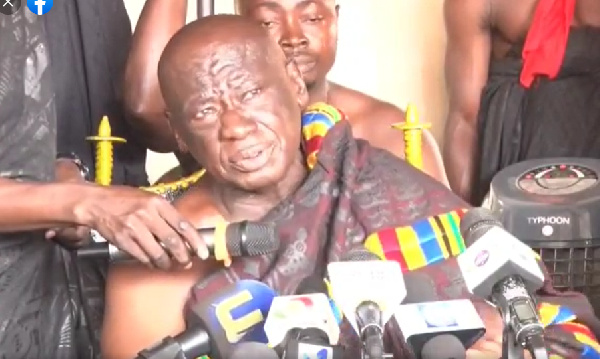 Barima Saasi Ayeboafo II, Chief of Mamponteng in the Kwabre East Constituency of the Ashanti region, has lambasted the government for failing to bring the needed development to his area.

The chief is unenthused by the manner in which the governing New Patriotic Party (NPP) led by President Nana Addo Dankwa Akufo-Addo, seems to be interested in them solely for political gains.

Speaking at a press conference, he disclosed that going forward, they will vote based on the level of development that reaches them.

"What sin have we committed against the NPP for denying us development despite voting massively for the party?

"From now onwards, we will vote based on development," he stressed.

The press conference dubbed: "Boni aye Kai" was held at the Mampongteng Palace on Tuesday, August 9, 2022.

Some infrastructure facilities Barima Saasi lamented about included the bad state of roads and the lack of functional markets.

He noted that nothing has been built not to mention the Agenda 111 hospital and school facilities promised by the president, a report by myjoyonline.com read.

He lamented about broken promises relative to road construction started in 2019 when Akufo-Addo cut sod for the project.

Markets were currently being held under high tension poles in the wake of an abandoned project that started in 2012.

Barima Saasi and the people of Mampongteng are the latest groups in the Ashanti Region to voice concerns about how the NPP government is failing the region considered its - world bank in terms of votes.