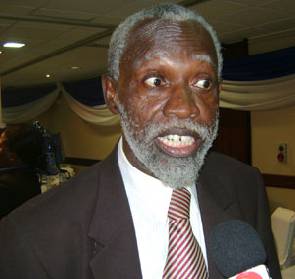 Former GIMPA Rector Professor Stephen Adei has expressed concerns over the basic requirements needed for one to become President of Ghana.

According to the outspoken academician, the standard measure for the highest office of the land appears too low.

“To become a president of Ghana, you need only three things; you must be 40years, speak English and not mad.

“We must raise the standards but we must also not say that unless you have PhD from London University you cannot become the President of Ghana,” Prof. Adei stated during the 53rd Annual Session of the Ghana Baptist Convention at Ejura in the Ashanti region.

The comments come on the back of his recent claim that President John Mahama was practicing nepotism as head of state.

He accused the President of appointing too many Northerners in the public service, a claim the government has rejected.

“One of the things going on which is totally unacceptable is about why one out of every four public sector appointment comes from the President’s area of origin. That is totally unacceptable because we are a unified country, we are a country whereby if you take any major group, whether Gas, Ashantis or Ewes you can form a cabinet from it,” he said