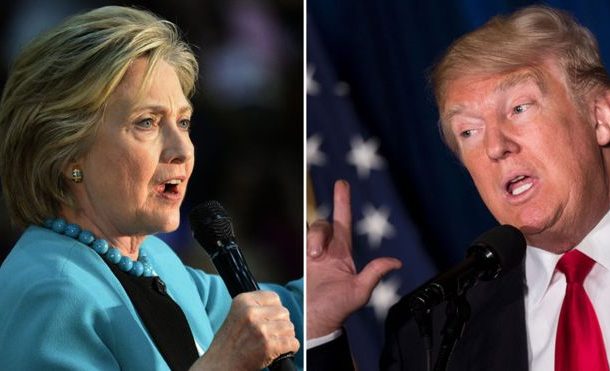 US presidential candidate Hillary Clinton has said she will keep "calling out bigotry and racist rhetoric" as a feud with Donald Trump escalates.
The Democrat made the promise in a statement where she apologised for suggesting half of the Republican's supporters were "deplorable" people.

Mr Trump had responded by saying the comment was "insulting" to "millions of amazing, hard working people".

Mrs Clinton accepted that she had been "grossly generalistic".

Polls released earlier this week suggest Mr Trump is gaining on Mrs Clinton, and the rivals are neck and neck in the key battleground states of Ohio and Florida.

Up in the air again: Analysis by Anthony Zurcher, BBC News

Hillary Clinton's "basket of deplorables" comments have drawn immediate comparisons to Mitt Romney's 2012 line about 47% of Americans on government dole supporting Barack Obama and Mr Obama's 2008 characterisation of downtrodden Pennsylvanians as clinging to guns and religion.

Unlike those noted gaffes, however, it is not clear how Mrs Clinton's public remarks will directly damage her. She is certainly unlikely to peel off any of Donald Trump's supporters by calling some of them racists or homophobes, but they have stuck by their man through thick and thin. Mrs Clinton's own backers likely agree with her description.

The only question is how the sizable chunk of undecided voters view the controversy. They had started to move toward Mrs Clinton after the Democratic convention but are recently back up in the air or aligning with a third party. They may take exception to Mrs Clinton's calling fully half of all Trump supporters - millions of Americans - deplorable, which is why she has walked back this portion of her comments.

If the debate turns over how many of Mr Trump's backers are overtly racist or bigoted, however, that is political terrain the Democrat will gladly fight on.

What she said on Friday


Speaking at a fundraiser in New York, Mrs Clinton called half of Donald Trump's supporters a "basket of deplorables". They were, she told the LGBT event, "racist, sexist, xenophobic, Islamophobic - you name it".

The rest of the Republican nominee's supporters, according to Mrs Clinton, were "just desperate for change".

How the Republicans reacted

tweeted response, Mr Trump said, "I think it will cost her at the polls!"

Millions of Americans, he said, supported the Republican nominee because they were "sick of corrupt career politicians like Hillary Clinton".

Other Republicans mocked Mrs Clinton, sharing photos of crowd in the Florida venue where Mr Trump spoke on Friday.

The hash tag #BasketOfDeplorables has been trending on social media as indignant Republicans attack Mrs Clinton.

"A candidate who writes off half the country as a #BasketOfDeplorables should be disqualified", was one comment on Twitter.


Apologising, Mrs Clinton said: "Last night I was 'grossly generalistic' and that's never a good idea. I regret saying 'half' - that was wrong."

"As I said," she added, "many of Trump's supporters are hard-working Americans who just don't feel like the economy or our political system are working for them."

But for most of the statement, she attacked her rival, accusing him of building "his campaign largely on prejudice and paranoia" and giving a national platform to "hateful views and voices, including by retweeting fringe bigots with a few dozen followers and spreading their message to 11 million people".

"David Duke and other white supremacists see him as a champion of their values," she said in the

It was, she said, "really deplorable" that her Republican opponent was linked to people from the right-wing "alt-right movement".

Where this is going


Passions are high just over two weeks before the first election debate between Mrs Clinton and Mr Trump on 26 September.

After one of the most bitterly fought election campaigns in living memory, Americans go to the polls on 8 November to elect a successor to President Barack Obama.

The Democrat is standing down after two terms in office.