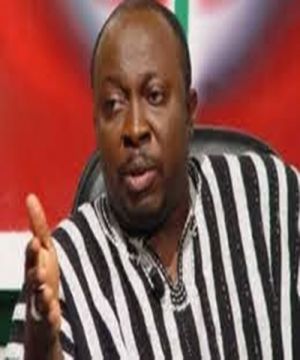 Former Member of Parliament for Akwatia Constituency in the Eastern Region, Hon. Baba Jamal has frowned upon the entertaining of homosexual activities in the country, describing the act as worse than armed robbery.

According to the Deputy Director of Legal Affairs for the opposition National Democratic Congress (NDC), the actors involved in the practice of LGBTQ, an initialism for lesbian, gay, bisexual, transgender and queer or questioning, intend to win the hearts of the future of Ghana, the youth; thus making them more dangerous than armed robbery.

“This is even worse than armed robbery because they are coming to steal our little ones and destroy them for us. They are coming to steal the youth and mess their future for them. We recently saw in a video one young man in pampers because of gay and is this something we should entertain in this country?”, he quizzed.

“Nobody should sit somewhere to make it look like we are joking. Let’s say it as it is so that whoever is engaging in homosexuality can seek help. Nobody is inciting hate but we are rather saying it as it is...

“Our beliefs in the country make it clear that homosexuality is an abomination and so we cannot tolerate it in the country. We are saying it as it is and so this is not hatred as some people want to create that impression”, he said.

Perhaps to show the level of abhorrence Ghanaians have for the practice, Baba Jamal indicated his readiness to offer these LGBTQ actors a place in Nima (a predominantly Muslim community), a suburb of Accra to set up an office to operate their abominable activities.

“If they are brave enough, I will offer a place for them in Nima to operate. If they will be there the next day, only time will tell”, he sarcastically stated.