How Mali snatched World Cup qualification from the claws of Ghana – Is Jimmy to blame? 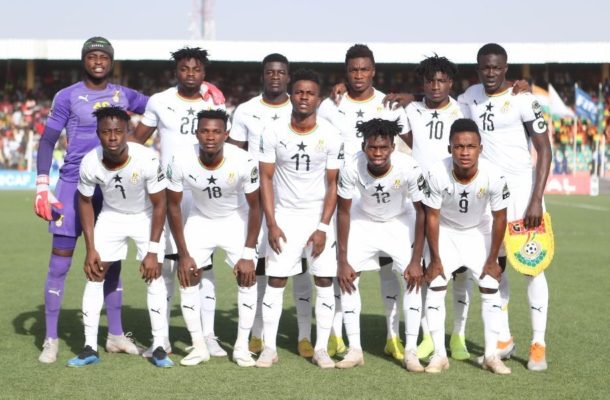 The Black Satellites of Ghana were painfully kicked out of the ongoing U20 AFCON in Niger by Mali in the last Group B game which left many completely gobsmacked on Saturday afternoon.

The astounding defeat also means Ghana will not be at the 2019 FIFA U20 World Cup to be staged in Poland in May.

A solitary strike from midfielder Hadji Drame was all that Mali needed to snatch the World Cup ticket from the claws of Ghana.

Strangely, Mali did not play any better game than Ghana but they had the most important element of the day – the goal.

While the Ghana players were being strangled on the field for ideas, head coach Jimmy Corbblah was out of ideas himself and could only throw his hands in despair as his boys failed to pick just a point in the game to see Ghana make it to the World Cup.

Jimmy made three changes to his starting eleven but that was not enough to save his face against a Mali side that needed only a win to make it to the next stage.

FootballMadeInGhana.com’ Sheikh Tophic Sienu takes a look at the tactical approaches of both teams and how Mali’s Kane Mamoutou was able to shut down Ghana’s Jimmy Corbblah, leading to Ghana’s amazing exit from the competition.

Ghana coach Jimmy Corbblah altered his line up for the game, making three key changes to clearly announce his intention for the clash. The introduction of WAFA midfielder Prosper Ahiabu, Danbort FC’s seventeen year old Nathaniel Adjei and right back Michael Baidoo clearly showed what Jimmy was in for – solid defending.

For the first time in all the games that Ghana had played, Jimmy had his defensive tactics right and that explains why Mali failed to break through the defence to score but for the gift Hadji Drame had.

Muntari Kamaheni and Michael Baidoo were restricted from surging forward with constant rapidity, aiding the solidity of the Ghana defence, especially with Nathaniel Adjei’s pair with Ishaku Konda. Konda still showed signs of lack of confidence but looked better than previous games. Sabit and Ahiabu did their jobs well.

With Kudus playing in a central midfield role as an offensive midfielder, what it means was that he was in to provide Lomotey with support as a second striker or an orthodox no.10 as we know while Atta Agyei and Emmanuel Kumah play from the right and left sides of midfield. Kumah’s skill and Atta Agyei’s pace were to be used but again, Ghana had it wrong.

The three midfielders, ironically all left footed, were cancelled out by the Malians who knew what to do to keep them away from playing. Kudus was always given two or three players to close him down, Atta Agyei hardly turned in a single cross and Kumah was lost in the battle. Lomotey was just left alone to wander in the game like a lost orphan in Makola Market.

No supplies for Lomotey means no chances will be created and no goals will be scored. This only meant that Ghana could only score from a dead ball situation but sadly, the only dead ball expert in the team – Kudus – was closed down while all the others were watching from the bench.

Mali were not a better team than Ghana but were a little determined as well as staying tactically mapped together. Their center back pair of Drissa Diarra and Clement Kanoute outmuscled Lomotey who looked lonely upfront.

Mamadou Samake, Mamadou Traore and Boubacar Troare were deployed for the combative job in midfield for the Malians while Hadji Drame played a free role, supporting the attack on several occasions.

El Bilal Toure and Sekou Koita were completely out of the game because the Ghanaian defence outnumbered the Malians in attack pushing the game to what looked like a stalemate.

Ideally, there was no worked out plan by both teams to get a goal and it was obvious that either individual brilliance, dead ball situations or luck could give either side a win. So when Mali had that gift of a goal from Drame’s cross, I knew it was over.

The Ghanaian side was transformed drastically in the second half but that was when Mali’s Kane Mamoutou also had his calls right. The introduction of Sadiq Ibrahim, Saliw Babawo and Sulley Ibrahim gave Ghana a huge advantage of holding on to the ball. This forced the Malians to defend deep but the introduction of these players looked a bit late, especially Babawo and Sulley.

With a Malian side not as fluid as the Senegal side Ghana met, and also lacked a lot of ball-playing midfielders, Ghana only needed to take advantage and hold the ball, keep possession and control the pace of the game but sadly, that was not the case. The three players who could change the game for Ghana only came on with some few minutes to end proceedings, which allowed the Malians to enjoy a field day.

Mali also brought on Ousmane Diakite, Lassana N’diaye and Sambou Sissoko – two midfielders and a striker for their likes just to renew the energy of the team to be able to neutralize the three who were introduced by Ghana.

In conclusion, Jimmy was not tactically poor as was the case against Senegal but he lacked variations.