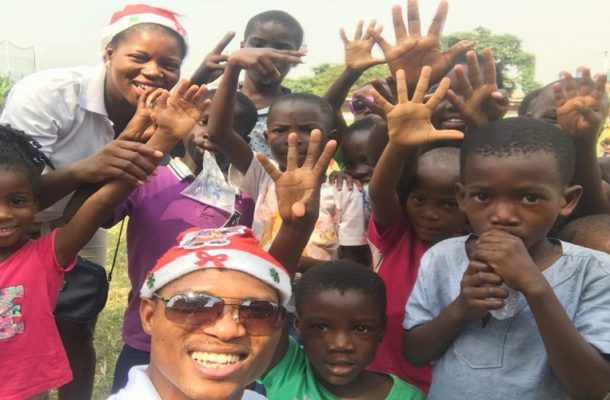 Lawyer Sosu believes it is about time Government began arresting street children as a bait to get their parents to bear responsibility of their neglect.

Speaking on Saturday 23rd December, 2017at this year’s Feed the Hungry Outreach, an event organized by the Treasure of Life Foundation at Pantang, the Human Right lawyer called on parents to be more responsible towards the upbringing of their children.

“Giving the recent incidents of sexual abuses of children and women, it is important to increase social support for the abused victims” he said.

“Some Ghanaian parents are becoming very irresponsible because no one questions them when their children are seen slaving on the streets.

"We have great laws for children protection in Ghana but we do not enforce them. Children who are seen loitering about unaccompanied must be arrested and detained through Social Welfare facilities until their parents are either formally charged or at least fined for the neglect of their children under the Domestic Violence Act”

increase support for abused children and women in Ghana.

He also added that Government through the Ministry of Gender, Children and Social Protection and the Department of Social welfare must enforce child protection regulations to prevent irresponsible parenting The Treasure of Life Foundation is a global outreach to Children in Slavery in Ghana and Africa founded by Lawyer Francis-Xavier Sosu. It is registered as a non-profit, non-governmental organization in Ghana, Kenya and USA. Lawyer Sosu explained that the Feed the Hungry Project (FHO) is a special outreach designed to educate the world on the need to share the love of God by sharing food with the hungry. “There are some children who don’t get access to food at all and sleep hungry daily” he said.

According to Hunger statistics by the World Food Program (WFP), some 795 million people in the world do not have enough food to lead a healthy active life. That’s about one in nine people on earth and the vast majority of the world’s hungry people live in developing countries, where 12.9 percent of the population is undernourished. The statistics also show that Sub-Saharan Africa is the region with the highest prevalence (percentage of population) of hunger. One person in four is undernourished. Nearly half (45%) of deaths in children under five – 3.1 million children each year is caused by poor nutrition. One out of six children, about100 million in developing countries is underweight and one in three children in developing countries are stunted. It is also estimated that 66 million primary school-age children attend classes hungry across the developing world, with 23 million in Africa alone. In Ghana, reports show that in the South about 20% of people live in poverty whilst in the north that figure is 60%. According to WFP Comprehensive Food Security and Vulnerability Assessment 2012, 24.2 % of Ghanaians live below the poverty line with food security being very low.

The Feed the Hungry Project (FHO) is a direct answer to the need for education and encouragement of Ghanaians to reach out to the hungry especially the vulnerable class such as enslaved children and street dwellers.

Lawyer Sosu advised the children to take their education serious as it is the only means to escape child slavery and poverty.

The Assemblyman of the Pantang electoral area who was also in attendance was full of praise for the good job by Lawyer Sosu to reach out to Pantang.