Humble yourselves and accept mistakes — Akufo-Addo to journalists 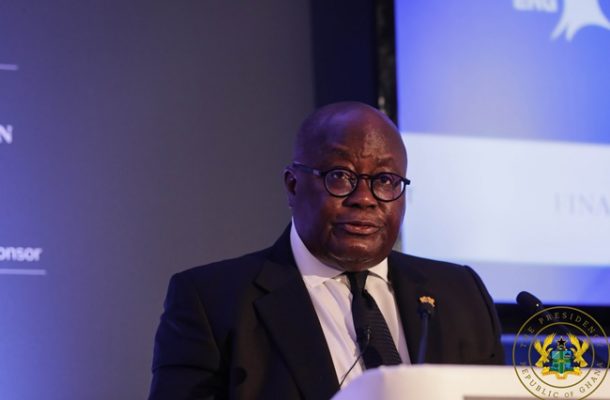 President Nana Akufo-Addo has asked media practitioners to humble themselves and accept responsibility for having done something wrong since according to him, it is not only politicians who make mistakes.

The president said irresponsible media practice is an abuse of freedom expression and that journalist should stop covering up their mistakes under the guise of media freedom. He said as humans, one can make a mistake at any time but it is up to you to acknowledge the errors.

“Politicians are not the only persons who make mistakes. Media practitioners, like all human beings, can also make mistakes, and, when they do, they should have the humility to acknowledge their error, and not have their misdeeds atoned under the guise of ‘media freedom’. Irresponsible media practice is an abuse of freedom of expression, not its manifestation” the President stated.

In a speech delivered at the 2019 Ghana Bar Association Conference held in Takoradi, the President averred that the upsurge in deliberate misinformation campaigns championed by the Ghanaian media has taken center stage in the practice of Journalism as some Journalists now fish for sensationalism instead of accurate and truthful reporting.

More often than not, the publication of unverified claims in the haste of first to break the news serves as a major threat to the integrity of the news world, according to the President.

“In such cases, even after the public has been misinformed, and the true facts are later made known, media often chickens out of an honest open acknowledgement that “we erred.” The response is often to refuse to apologize or sweep it under the carpet and move on to the next big story” he stated.

The gruesome killing of an investigative journalist, Ahmed Suale, who worked with the Tiger Eye Private Investigation (PI) on January 16 this year is one of the freshest, horrifying news in the minds of Journalists when the topic of media freedom is mentioned.

Speaking at the conference, President Akufo-Addo described the murder as “sad” but however expressed worry that the media will in any way link the murder to an attack on media freedom when no evidence has been gathered.

“It was a sad and unfortunate moment for us all, when Journalist, Ahmed Suale, was shot and killed by still unknown assailants. It was equally sad and unfortunate when this heinous act was described, without any evidence, as an attack on media freedom,” he said

Crime, he said, is crime, and the law enforcement agencies are required to ensure that the perpetrators of crime are rapidly apprehended and prosecuted.

“Strenuous efforts are being made to find the killer or killers of Ahmed Suale, who will be found and made to face justice,” he added.

The President stated further that the media wields an immeasurable amount of power and therefore called on them to ensure they do not sacrifice their integrity to ‘who is the first to break a story’.

“I call on Ghanaian media practitioners to take a second look at the power they wield, and the responsibility they owe society, with a view to ensuring that they do not sacrifice integrity and the future of our society for today’s headline or breaking news,” President Akufo-Addo said to the gathering of lawyers.

According to the commander-in-chief of the Ghana Armed Forces, no attempt is being made by his Government to suppress freedom of expression in Ghana, as the continuing vitality of the Ghanaian media and the intense diversity of the public discourse remain some of the most internationally admired traits of Ghanaian democracy.

“Ghanaians are, today, as they have been doing for much of the 4th Republic, able to live boldly and freely their feedback on policies and programmes of government; civil society organizations are able to interrogate fearlessly government actions and positions, compare them to global best practices, and offer views and critiques aimed at complementing the efforts of government; and the political opposition is able to raise dissent openly, and canvass without intimidation for alternative viewpoints.”

With the Constitution of the 4th Republic guaranteeing freedom of expression, including freedom of the press and other media, as a fundamental human right, and making elaborate provisions to protect the freedom and independence of the media, the President stated that the repeal of the Criminal Libel Law in 2001, when he was Attorney General represents one of the high points of his public career.

“In my time as President, the Right to Information Act, whose passage had, hitherto, become a taboo, was finally enacted by Parliament. My attachment to the vital nature of freedom of expression in promoting national progress and security has not changed since I became President,” he added.

Nonetheless, he stated that there is the need for continuous training, self-regulation and an insistence on acceptable media ethics and journalistic standards by media houses, practitioners and their organizations as part of the process of installing a culture of accountable governance, requiring high standards and professionalism in the Ghanaian media.

This, according to him, is one of the surest ways of addressing the current shortcomings and ills of the media landscape.