I always want to be creative - Kudus Mohammed 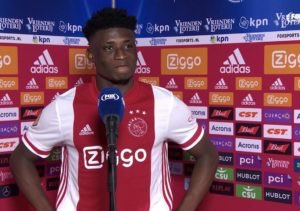 Ghanaian midfielder Kudus Mohammed says he feels at home in his new surroundings at Ajax as the squad makes him feel at home.

He adds that he always wants to be creative no matter whichever role he is made to play.

The Ghanaian was in good form on Sunday afternoon as he helped his side Ajax to a 3 nil victory against RKC Waalwijk in his first start.

Speaking after being awarded the man of the match award, the midfielder says he always wants to be creative.

“I believe in myself and the team makes me feel like I am part of the squad so that really helps me.

I want to be creative and make sure that you enjoy the game, that’s part of how I play. Things are going smooth already, so let’s go!”, he said in a post-match interview.

The Ghanaian midfielder joined the Dutch giants this summer from Danish side FC Nordsjaelland.

He had to wait to make his competitive debut against RKC Waalwijk after watching from the bench in their first game against Sparta Rotterdam.