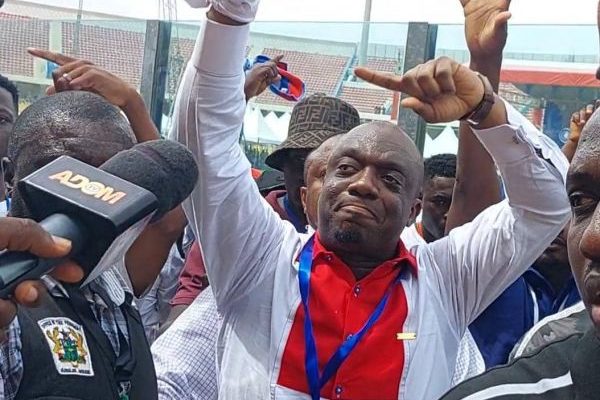 Justin Frimpong Koduah, General Secretary of the ruling New Patriotic Party (NPP), says no person can bully him into making decisions regarding the party.

According to him, he is not the type that can be dictated to, therefore building defence for the choice of the Executive Director of the Danquah Institute (DI), Dr. Antoinette Tsiboe-Darko as Deputy General Secretary of the NPP.

Following her appointment which was announced in an official statement on Friday, 26th August, 2022 after the party's National Executive Committee (NEC) meeting, there are speculations that Dr. Antoinette Tsiboe-Darko was appointed under the powerful authority of the cousin to President Nana Akufo-Addo and founder of the Danquah Institute, Gabby Asare Otchere-Darko.

Mr. Gabby Asare Otchere-Darko is said to be pulling the strings in the New Patriotic Party, particularly within the party's hierarchy.

It is believed that Dr. Antoinette has been appointed as the Deputy General Secretary because Gabby says so.

But Justin Frimpong Koduah is sickened by the claims and states emphatically that Gabby had no hand in the appointment of the Deputy General Secretary.

"I'm not a person that I can be bullied. I'm telling you. I'm not someone who can be dictated to or someone can be imposed on me. If that was the case, I would never had contested for the General Secretary position," he exclaimed during an interview on Peace FM's "Kokrokoo" Monday morning.

"God has helped for the party delegates to vote for me. They are expecting me to deliver and you think I'm going to compromise my position for someone's interest?", he queried.

He emphasized that, "when it comes to that position, I can speak for Antoinette that nobody imposed her on me and nobody even convinced me or even brought her name that I should consider  . . . I'm convinced that we have a gem. We have a very astute person. We have a very result-oriented person who can manage the office as Deputy General Secretary in the shape of Antoinette Tsiboe-Darko".