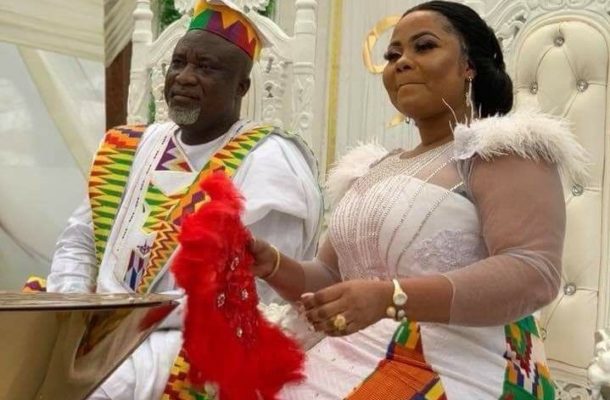 POLITICIAN, Hopeson Adorye who is now the husband of Gospel musician, Gifty Osei, has revealed that his love for the singer did not permit him to court her for a long time. According to him, he dated the singer for about three months.

In his speech at their very private December 28 wedding, Mr Adorye said he was in a hurry to marry her after she told him she was single.

“When she told me that she was single, I was excited because I am a divorcee and had eyes for her the very day I met her at an event she had come to perform at.

"You know I saw a ring on her finger that day and was scared she may belong to someone so I kept quiet but once in a while; I called her to find out if she was doing well. It was on one of these occasions that I got the courage to ask if she was married and she answered no.

“So trust me I did not want to waste any time at all because this was something I wanted the very day I set eyes on her so after a month of dating her, I went straight to do knocking and then thanks be to God, from October to December, here we are as husband and wife," he said.

Mr Adorye continued, “I can tell everyone here with all sincerity that my heart is at peace knowing I have her now. In fact my children are very happy about us, they love her and her children love me too.

"This is the work of God. Another thing is that she has never asked me for anything before, nothing and for me it is a good thing.”

Is his advice to people in relationships Mr Adorye said, “There is no point in saying I am with someone and I am studying the person, one year, two years, what are you studying? You just have to be vigilant and if you like it, just go in for it.”