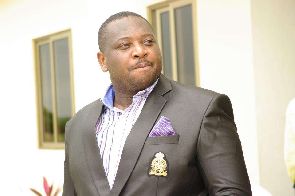 Many football enthusiast where surprised when the bank roller of division one league side Kpando Hearts of Lions decided to vie for the lowly position of executive council and not the lofty Ghana Football Association President.

Most people believed is knowledge, insight and acumen garnered over the years serving as the spokesperson for the FA and his involvement in he game would have been beneficial to the restructuring of the new GFA.

According to Randy his personal engagements and the fact that certain close friends were contesting he decided to stay put with the Executive Council so as to contribute his quota to the beautiful game.

Randy Abbey who has confirmed on numerous times his support for Fred Pappoe in the race for the GFA presidency was speaking in an interview with Kumasi based Sikka FM.

“I didn’t contest the Presidency due to some personal commitment and the colleagues that are aspiring” he disclosed.

Six persons are contesting for the coveted GFA Presidency with elections scheduled to come off on October 25th.