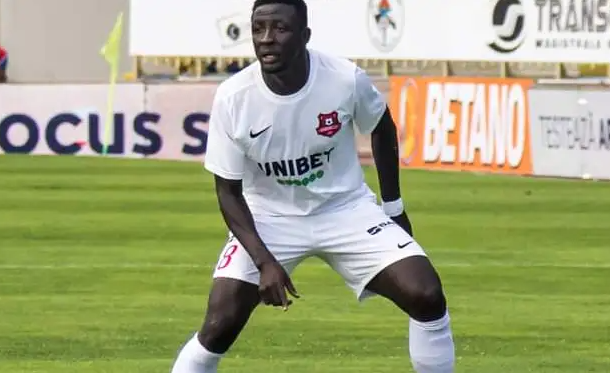 Ghanaian midfielder Baba Alhassan is not a happy man despite scoring the winner for his Romanian side FC Hermannstadt.

He averages one goal per game. The midfielder Baba Alhassan, 22 years old, achieved a double each with his side's wins in matches against Mioveni (3-0) and with FC Voluntari (2-1).

According to the Ghanaian midfielder, he hopes his side start paying them their arrears right from the lower division before they secured promotion.

"I have no idea. I hope the money will come. Everyone is angry, nervous, but in the end we put our soul and body for football. And we go to training, and we give everything in matches. We train and hope. Honestly, I tell you, we can do much more than what we have shown so far. "

He added that his team would have been in the top reaches if only their money issues was solved as even without money they are winning.  "We can play top matches, if it weren't for these money problems, we would concentrate even better, Hermannstadt could be a play-off team. Yes, yes, maybe some people don't believe in us, but we believe that, paid up to date, we could fight for Sibiu to have a team in the Top 6. In the end, you see, there are big financial problems, but we go in and give everything for football, for the club. The Hermannstadt boys are strong characters. We are the first to want all problems to be solved" he said.