I don’t own any mining empire - Frimpong Boateng 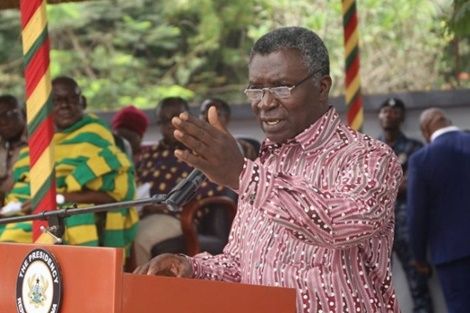 The Minister of Science, Technology, Environment and Innovation, Prof. Kwabena Frimpong Boateng who has been accused, in some media reports of unfairly holding on to some mining concessions in the country says the reports are “untrue”.

The company, which incorporated in 2009 was authorized to carry on business as General Merchants and Manufacturer’s Representatives, but obtained the rightful certification to include Gold and Diamond on 27th March 2009.

According to the report, the company was granted 5 prospecting licenses in the Gyapekrom area namely; Nwenem, Asiri, Gyapekrom, Baabiareneha and Adomesu - But, another document available to Peacefmonline.com indicate that only 2 prospecting licenses was granted to Symphony Limited and has since vacated the land due to some conflict between the “chiefs of Gyapekrom, Assemblies and the Communities.”

The report again said on November 14, 2014, Prof Frimpong Boateng, in his capacity as Director of Symphony Limited reportedly wrote to notify the Minerals Commission that Symphony Limited was shedding three of its five concessions and intended to maintain only Baabiareneha and Adomesu.

According to the report, On April 15, 2015 the Commission reportedly wrote to accept Symphony’s decision to drop the three prospecting licenses. Under Ghana’s mining laws once a licence is shed it is free and allotted to any mining company that applies to acquire it on a first come first served basis. In this case however, the 3 Prospecting licenses dropped by Symphony are reportedly still being reserved for the company.

All theses and other allegations stated in the reportage have been denied by the Chief Executive Officer of Symphony Limited. Mr Jojo Frimpong-Boateng in an interview with Peacefmonline.com.

Reacting to the claims, Professor Frimpong Boateng told Peacefmonline.com Thursday, January 31, 2019 that the allegations are being bundled by some individuals to tarnish his reputation.

“I have done nothing wrong, it’s a long complicated issue and people don’t understand. I have seen such reports myself but I have not done anything wrong. When I revoked the license of some company working in one of those concessions, they thought I had an interest but later the minister of finance went there and saw things for himself and they noticed I was right in the decision i took," he said.