‘I get whatever I want’: Chairman Wontumi goes after Delay for delaying him 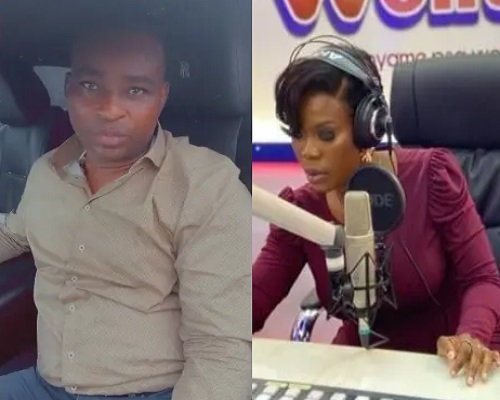 Chief Executive Officer (CEO) of Wontumi Communications Limited, Mr. Bernard Antwi Boasiako aka Chairman Wontumi is obviously not happy with media personality, Deloris Frimpong Manso, popularly known as Delay in what the former says the latter has disappointed the fans of Wontumi Radio.

One can recall that on Friday, April 22, 2022, Delay hosted the Drive Time show on Wontumi Radio.

The popular and talented broadcaster trended on various news and social media platforms for coming back on radio after going off for years to venture into her own business.

Aside from the trends, listeners and fans of the Wontumi brand expressed joy and congratulated Delay for coming onboard.

However, Delay released a statement saying she was only on the radio for the fun of it. She said she had no intentions of going back on radio permanently as reported in the online media.

She tweeted, “It was great playing for WONTUMI FM last Friday. But it was for fun. I do not have intentions of going back on radio permanently. I'm currently busy building my own businesses. Thanks for all the kind messages!” 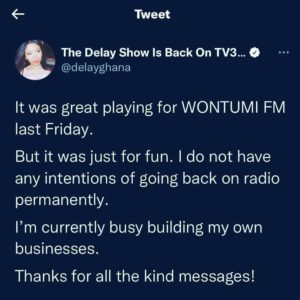 But, this appears to have not gone down well with the CEO as he has approached the broadcaster in a bit to convince her to get serious.

In a video shared by Delay on her Twitter handle, Chairman Wontumi could be seen going wild on the former. He told her not to delay the business since he could give her whatever she wants.

“Delay of the second, you must start work, you cannot disappoint the fans. You are ready. I get whatever I want. I am Wontumi. So you cant delay me, you must work in Wontumi Radio, thank you,” he said.

Delay, however, insisted she was not ready for all the offers from Chairman Wontumi who is also the Ashanti Regional Chairman of the governing New Patriotic Party (NPP).