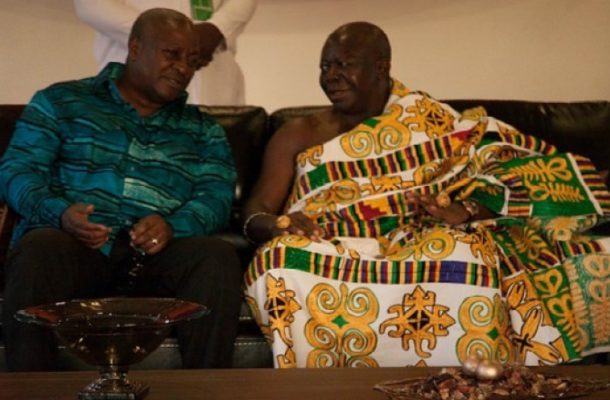 Ruler of the Asante Kingdom, His Majesty Otumfuo Osei Tutu II, has revealed that his outfit made a huge involvement in ensuring peace in Ghana at the aftermath of the 2016 general election.

According to the Ashanti monarch, he had to intervene to convince ex-President Mahama to concede defeat.

Then incumbent President Mahama conceded defeat and handed over power to then Presidential candidate of the New Patriotic Party (NPP) Nana Akufo Addo after his party, National Democratic Congress (NDC) raised issues with over-voting and other election irregularities.

Speaking at the UN High-Level Forum on the Culture of Peace at the Headquarters in New York, Otumfuo Osei Tutu said Manhyia was heavily involved in ensuring a violence-free election after the polls.

“I’m proud that in a quiet and informal way we in Ghana are showing the benefits of the traditional and contemporary cohesion in governance. Apart from the constitutional arrangement for a National House of Chiefs, the respect for traditional authority has created a layer of moral authority that can be mobilized in times of crisis. On occasions where the political temperature has been on the verge of boiling over it has been possible to bring the combatants into a quiet conclave to cool down passions and restore calm”.

The Asantehene added: “At the conclusion of the last Presidential and Parliamentary elections the country stood on the edge of disaster. The UN Representatives and the Diplomatic community were aghast alarmed that Ghana was about to slip down the slope of electoral violence. Fortunately, the moral authority of the Palace was at hand. We were able to intervene to persuade the losing candidate to accept his fate and fly both candidates for a quiet encounter to pave way for a smooth handover.”