I need your support to build National Cathedral - Akufo-Addo 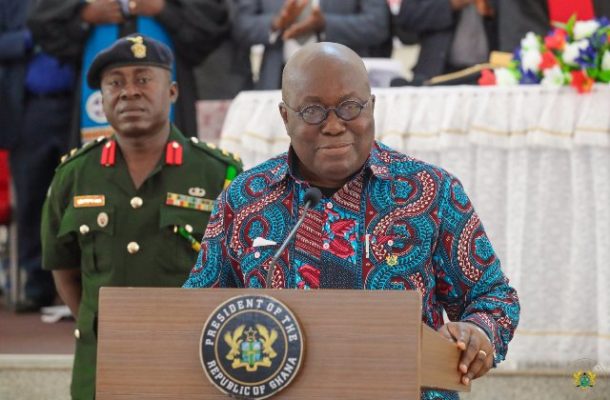 President Addo Dankwa Akufo-Addo has called for support to construct the National Cathedral of Ghana.

He made the call on Friday, February 8, 2019, at the Museum of the Bible in Washington DC.

Prior to the launch of fundraising for the National Cathedral of Ghana, on December 28, 2018, the President made a personal donation of $100,000, a demonstration of his commitment towards the building of the Cathedral.

The National Cathedral of Ghana when constructed will have an auditorium with a seating capacity of 5,000 and with its chapels and baptistery.

There will be a house of music, the Museum of the Bible and an art gallery.

According to Mr. David Adjaye, the Architect of the Cathedral, the design will be a genuine reflection of the art and culture of the good people of Ghana.

He described the high pitched and staggered roof as similar to the Akan’s architecture and the frontage will be concave and decorated with timber with a semblance of Ashanti royal stools.

The launch was welcomed by the Most Reverend Charles Gabriel Palmer-Buckle, Metropolitan Archbishop of Cape Coast, Ghana, and a member of the Board of Trustees of the National Cathedral of Ghana.

On behalf of the Trustees and the co opted members, the Archbishop expressed gratitude to the President for his faith in their experience and expertise. He concluded his welcoming remarks charmingly in various Ghanaian dialects.

Mr Steven Green, the Founder and Chairman of the Museum of the Bible gave a rendition of how his rich experience and knowledge were solicited during the initial planning of the building of the Cathedral and could not be more grateful.

He stressed on the importance of such an edifice and the need for rallying support of the President's vision.

Ghana's Ambassador to the United States of America, His Excellency, Dr Baffour Adjei-Bawuah, described the President as an honourable man, a man who has an intensity of intent for his vision in his introductory address.

The Ambassador assured the enthusiastic guests about the President's dream and said: “The dream he is handling is not personal but national.” He further reminded that “the Cathedral will not be anybody's parish church but a nation's parish church, a place to go to and make a submission on behalf of oneself and the nation, its everybody's home.”

Ambassador Dr Adjei-Bawuah again said the yet to be constructed National Cathedral of Ghana ought to stand as a monument of God's graciousness to Ghana.

The President began his remarks at the launch with a deep appreciation to the Board of Trustees, Steven Green and the high number of people who had graced the occasion as a sign of immense support for the construction of the Cathedral.

He shared the three pillars on which he believes are good reasons enough to humbly and passionately push for the nation to have a National Cathedral.

The fact that Ghana has been spared civil wars, famine and endemics, it is proper to thank God by building him a House of Worship.

Seventy-one per cent of the people of Ghana are Christians though diverse in their persuasions, the President was positive, the National Cathedral will serve as a unifier.

The Supreme Court's ruling on January 28, 2019, supported this assertion, the President added.

I made a pledge to God, that,  if I become the President after two unsuccessful attempts in the 2016 Presidential Elections, I will build a Cathedral to the glory of God. This the President said is the third reason for his passionate appeal to raise resources for the Cathedral.

He was clear that the National Cathedral of Ghana will not be a monument to beautify the city of Accra but a place of convergence for the Christian community to worship, pray and promote deep national discourse on the role of the faith in nation-building.

The President was positive that just as Nehemiah motivated the people of Israel to build the wall of Jerusalem, same God will prosper people both home and abroad to build the National Cathedral of Ghana to his glory.

The Chairman of the fundraising committee and a member of the Board of Trustees, Archbishop Duncan Williams appealed for great support and funds for the construction of the Cathedral. He drew the attention of all gathered to Genesis 22 of the Bible and convinced them to give to this project to receive the blessings of Abraham from God.