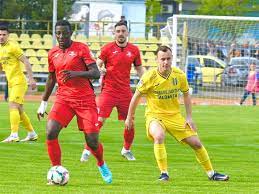 He says that clubs in Romania are mostly in dire financial need and will not want to join another Romanian side with all the financial turmoil.

According to Alhassan, he wants a move to one of the top teams in Europe and hopes it happens very soon as he cant wait to get out of Romania.

"Football in Romania is at a very high intensity, it is not an easy league. It's hard football, even if the fans say it's easy to play in League 1. It's really not easy at all"

When asked if he wants to leave Romanian, the Ghanaian did not mince words as he answered he wants out immediately.

"Seriously, one hundred percent, I want out. I want to play in a top league, I want to reach the highest level abroad. In Romania? I think there are problems with money at several clubs, what should I do, I'm going from difficulty to difficulty?! To not know when I get my money or to get it after I don't know how many months..."