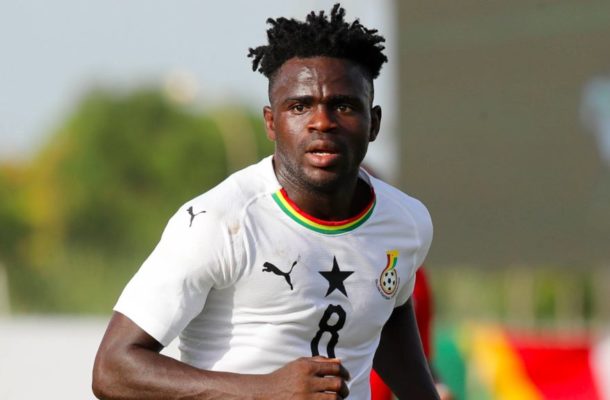 It came as a surprise to many that less than a month after signing for Tunisian side US Tataouine, Ghanaian midfielder James Akaminko was shown the exit by his new club without kicking a ball.

Rumours was rife in Ghana that the former Ashantigold midfielder had been sacked by the Tunisian side although the player has parted ways with them he explains how it happened.

In an interview with Sunyani based Nimde3 FM he disclosed that the coach who signed him had been fired and the new one was not too convinced about him and wanted him to undergo trials something which he baulked at.

“I was not sacked by the club because I couldn’t play as reported by some media houses in the country.”

“I left Tunisia because the coach who signed me up for the club left and his replacement wanted me to undergo trials off which I refuted and led to the termination of my deal with the team”, he noted.

According to Akaminko he was not ready to undergo trials at the Tunisian side leading to the termination of his contract.


“You know me and you know what I can do as a footballer and I don’t think a player of my calibre should accept to go do trials in Tunisia and that forms part of the reason why I decided to not do the trials at the club”.

“I am not going to be affected in any way with this, and I am ready to take my game to the next level to ensure that whatever I want to achieve as a player come to pass no matter what has happened because I am not bothered so much”, he answered to a question.

“I am now discussing things with my agent and family to see the best possible way forward”, he added.

The free agent was heavily courted by Asante Kotoko and moneybags Legon Cities but he spurned them all to sign for the Tunisian side but now a return to the Ghana Premier League looks eminent.