I was responsible for the line-up, tactics in the 2nd leg against Hamburg - KP Boateng 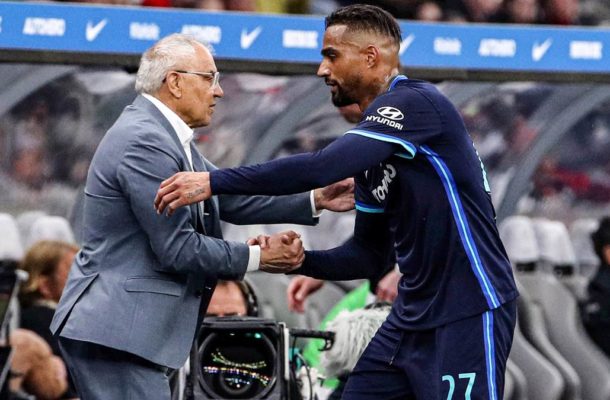 Ghanaian midfielder Kevin-Prince Boateng says that he was responsible for the line ups and tactics in Hertha Berlin's second leg game of the relegation play offs games against Hamburg.

After losing 1-0 in the first leg, Hertha Berlin overturned the score line with a 2-0 home win to stay in the German Bundesliga.

Felix Magath who replaced Tayfun Korkut revealed that at times K.P Boateng helped with tactics among others.

In addition, Boateng again pointed out that he was responsible for the line-up and tactics in the second leg against HSV . "I gave the speech before the game. Magath wasn't there at all, the assistant coach sat next to me, put the laser pointer in my hand and said: Talk to the team. I took it really seriously, with him pointer," Boateng told the news magazine Der Spiegel .

For example, he said to striker Stevan Jovetic: “You press, you go for the goalkeeper, I have the six, you go out on the right and so on. An hour and a half later we drove to the stadium together and won. For It was like an accolade for me. Now I can also become a coach."

Boateng had previously approached Magath. "We in the team thought about what we could do in the second leg. Then at some point I said: Let me talk to the coach. I know how we all think," he said and explained: "He came to me and asked me how I see my role in the second leg. And I told him that I could play until it was no longer possible. And I had an idea of ​​how we should play. He replied: Tell me. I then explained to him that I would which line-up I would like to play and said: "If we play like this, we'll win and stay in the Bundesliga. I'll talk to the players. Trust me, Mr. Magath." Then he replied, 'Okay.'"

Boateng had hardly played a role under Magath's predecessor Tayfun Korkut. "If you're constantly criticized as a leading player and don't play, you get a problem with the support of the team. If you don't play and, like me, always talk loudly, people quickly say: Shut up! When Magath came, I did I asked myself what the boys expect from me now. That I would face Magath? That I don't do certain things in training? But what did Prince Boateng do? I gave it my all, as much as I could. Because I knew: That's Fredi Bobics and also my last chance," he said.