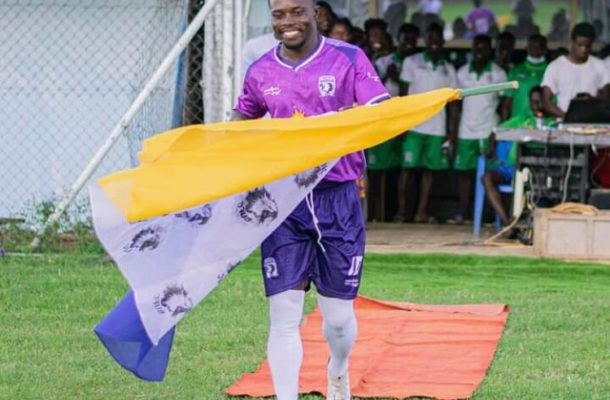 Club President and owner of Ghana Premier League side Bechem United Kingsley Owusu Achiaw aka Agama has revealed that he will not forget about the good deeds of star forward Augustine Okrah just because he was sent off against Hearts of Oak in the MTN FA Cup finals.

The player led the charge of the Ahafo based side as they hunted in vain for the Ghana Premier League and MTN FA Cup double.

He was shown a red card on Sunday as his side lost 2-0 to Accra Hearts of Oak to lift the ultimate at the Baba Yara Stadium.

Speaking in an interview with Asempa FM, the owner of Bechem United says that his star player should have been a little patient but he won't forget his good deeds because of one mistake.

"I will not forget about the good deeds of Okrah because he saw a red card against Hearts of Oak.

We want his kids to know that he played for Bechem United and did well in the past."

"It is the one who goes to fetch water that breaks the pot as Okrah assured me that he will bring the cup to Bechem.

It tells you how eager he was to win the MTN FA Cup trophy.

We will not condone Okrah's behaviour but its an advise to us all to be patient." he said

The former Kotoko forward scored 14 goals for his side in the 2021/2022 Ghana Premier League season.